12th – 19th April, 2008:This was a diving holiday attended by 2 BASAC members and was organised by the Bracknell BSAC Club . 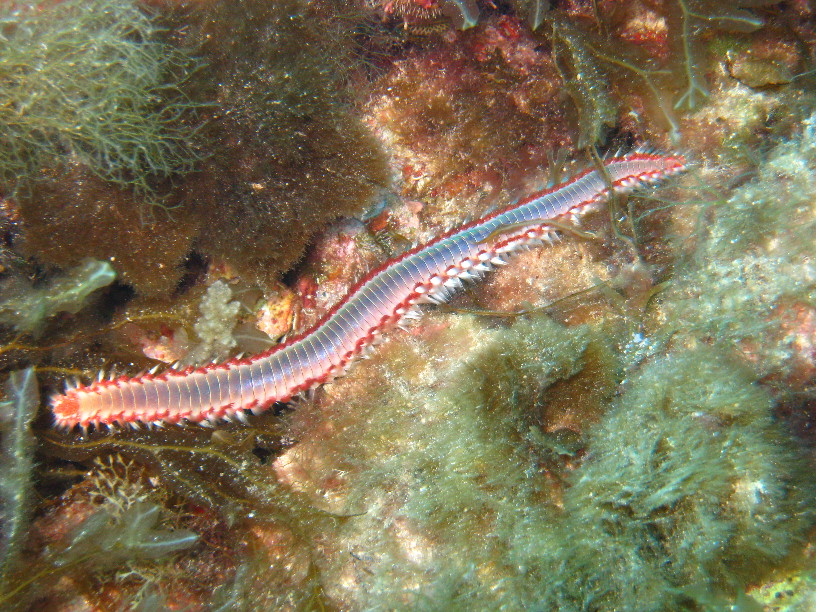 A fireworm about six inches long, there were quite a few of these although not exactly abundant.

We didn’t see a lot of largish fish of dinner plate size or more, probably because they had been put on one. But there were lots of other things to see, and the viz was good, about 20 m generally.

There are several caves to swim through which were interesting although not much living in them.

The problem with caves and shore diving is that you have to swim to the cave, which is good if there’s no hurry, but can be a bit rushed if it’s a reasonable distance, and then you have to rush back. On some dives we missed a lot of interesting things because we were racing to get to a cave. The caves are interesting to see if you can jump off a boat and go straight there, so there is time to meander about after, but I’ve gone off dives where you just see the cave at the expense of all else. However, it is interesting to see what’s round the next corner or over the lip, or to get out into another part of the sea having done a “swim through”. 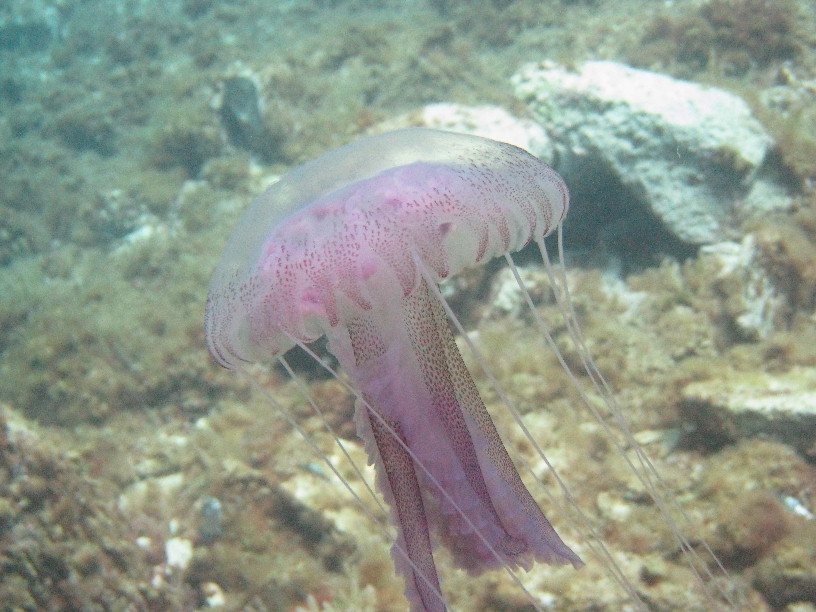 Easy to photograph, when they’re there, they’re everywhere. We couldn’t aviod getting stung by the very small ones (between mask and hood) but they weren’t painful and soon disappeared.

The diving was organised by a dive firm called Dive Deep Blue who are based in Bugibba near Qawra in the North East side of the island.  They were able to accommodate all diving preferences, from wreck penetrations to just meandering about.

The hotel we stayed in was the Santana, which was fine, cheap and within an easy walk of the dive shop. There were a very good selection of restaurants in Bugibba, from very-cheap-and-very-good to not-so-cheap-and-even-better. 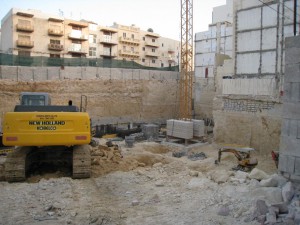 Digging foundations of a new building

When they make a new building in Malta, the foundations are very deep and the basement covers the entire area of the new building, right up to the adjacent properties, seemingly almost to undermine them.
Very few of the buildings gave the impression of being finished, even ones that had been in use for several years. I wonder if there has been or still is, a policy to leave reinforcing rods sticking out of the walls which may one day have another buliding against them.
And the roads didn’t suffer from being over maintained either. Most were full of potholes and crude repairs, and not at all smoothe. Our dive vans drove on the least rough, not necessarily on the left! (It’s left hand drive in Malta.) This was quite a relief, because again, they didn’t seem to worry much about suspension.

The pictures here were from my first efforts with a camera underwater. The camera is a Canon Ixus 860, which has a 3 inch screen so quite large, necessary for my crummy eyesight; and a 28 mm shortest focal length, so reasonably wide angle without getting badly distorted. The flash is not very powerful as you would expect from a compact camera, but the main problem with using the flash is that it takes some time to fire; this is not a charging problem and I’m still working on it. 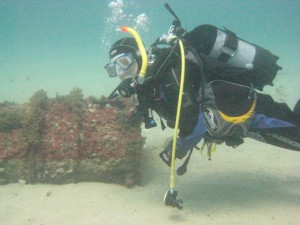 Diver with treasure chest -Pity we couldn’t get it open and it was too heavy to lift, so it’s still there folks. But I just can’t quite remember where this was!

So on these dives I mainly used the custom white balance function, which can be very conveniently programmed on to the spare button, so you take a white dive slate, point the camera and press the button; you can then see correct colours on the camera screen, and even at shallow depth, they look much better than by eye.

The next problem is how to use an extra flash with this camera; the book says you can but not how to. The menus do not allow (as far as I can see) the independent setting of aperture and/or shutter speed. This means that because the extra flash does not plug into the camera but is operated by a strobe over the camera’s flash, when set to flash, the camera will set the speed and exposure for its own flash guide number, which will give a long exposure and wide aperture, so the extra flash will over expose the shot. Unless the camera uses its own TTL, which could theoretically close the shutter when it has had enough exposure. There are two problems here; first a camera TTL would not shut down an external flash, and second it could not close a shutter fast enough to prevent over exposure. So that ain’t gonna work. Well, I’m still working on this and in communication with Canon, who do have a pretty good system of tech support on their website. 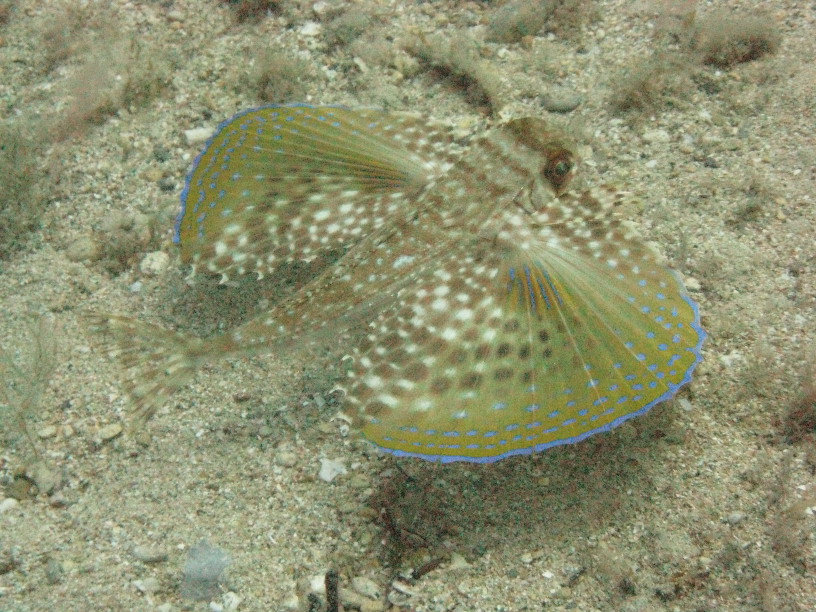 Flying Gurnard – This chap only gave me one look at his wings, then stayed just out of reach of the camera.

The Canon response to my enquiry about an extra flash on the IXUS 860 is the following extract from their email:
“The High-Power Flash HF-DC1 external flash is used using a bracket mounted to the tripod mount and works in conjunction with the Ixus 860 IS’ as a slave flash to provide some more flash power for when e.g. taking pictures of a group of people. The camera will calculate exposure as needed based on it’s and the HF-DC1’s readings.”
However this implies that the camera has to be told to change its exposure settings because the extra flash is being used, but so far I haven’t found any way to do this in the menus. And anyway this flash is not suitable for use underwater, so no point. 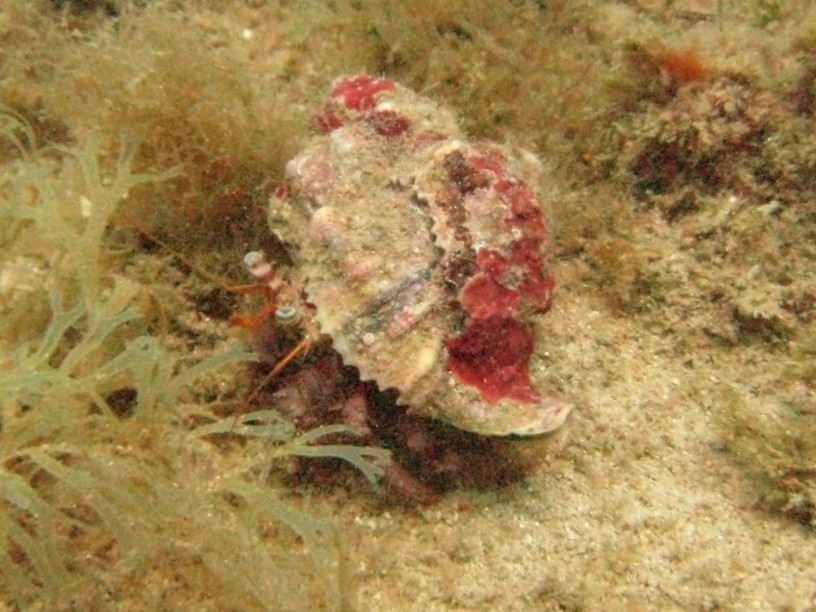 Hermit crab – This little chap was about 60 mm long and living on the Maori wreck.

In conclusion I think that an extra flash would only work on this camera when the subject is too far away to be illuminated by the camera flash. The extra flash would then need to be adjusted to give the correct exposure. At least this is feasible with digital cameras without having to do much in the way of guide number calcs as it would be with film. Or another way would be to have an extra light so that the camera could see the subject illuminated and set itself up.