In theory our last big diving event of the year didn’t get off to the most auspicious start!

A hope for better weather through being a month earlier didn’t pan out & a ‘COVID-19’ reduced maximum party size of 6 ended up as a 5: Tim, Geoff, Colin, myself & Kirsty on Saturday & 4 (losing Geoff) on Sunday. It did of course make the boat roomier but we’d far rather had the extra company.

The ever reliable Top Gun

Still our dirty group of 5 arrived pretty much together at 9:30 outside aquanauts & duly loaded their kit onto the roomy benches on Top Gun & awaited what their options were – Gary our skipper was game to go out for a looksee so we did

1: Breakwater Fort – In the end we bounced across the sound to the Fort & watched the breakers smash their way over the top of the Breakwater while we readied for our dive hoping for quiet & calm below.

The Fort & the Breakwater – its’ high tide, neaps too!

Kirsty was solo diving (accompanied by her camera) & went in first followed by Geoff & Tim & then Colin & myself.

Going down visibility didn’t look to be much  so we focused on close-up tactics as we carefully picked our way over the assorted debris on the sea bed. We found the mangle & then attracted by the lure of other scraps & the potential they offered for beastie hiding places we left the fort behind. 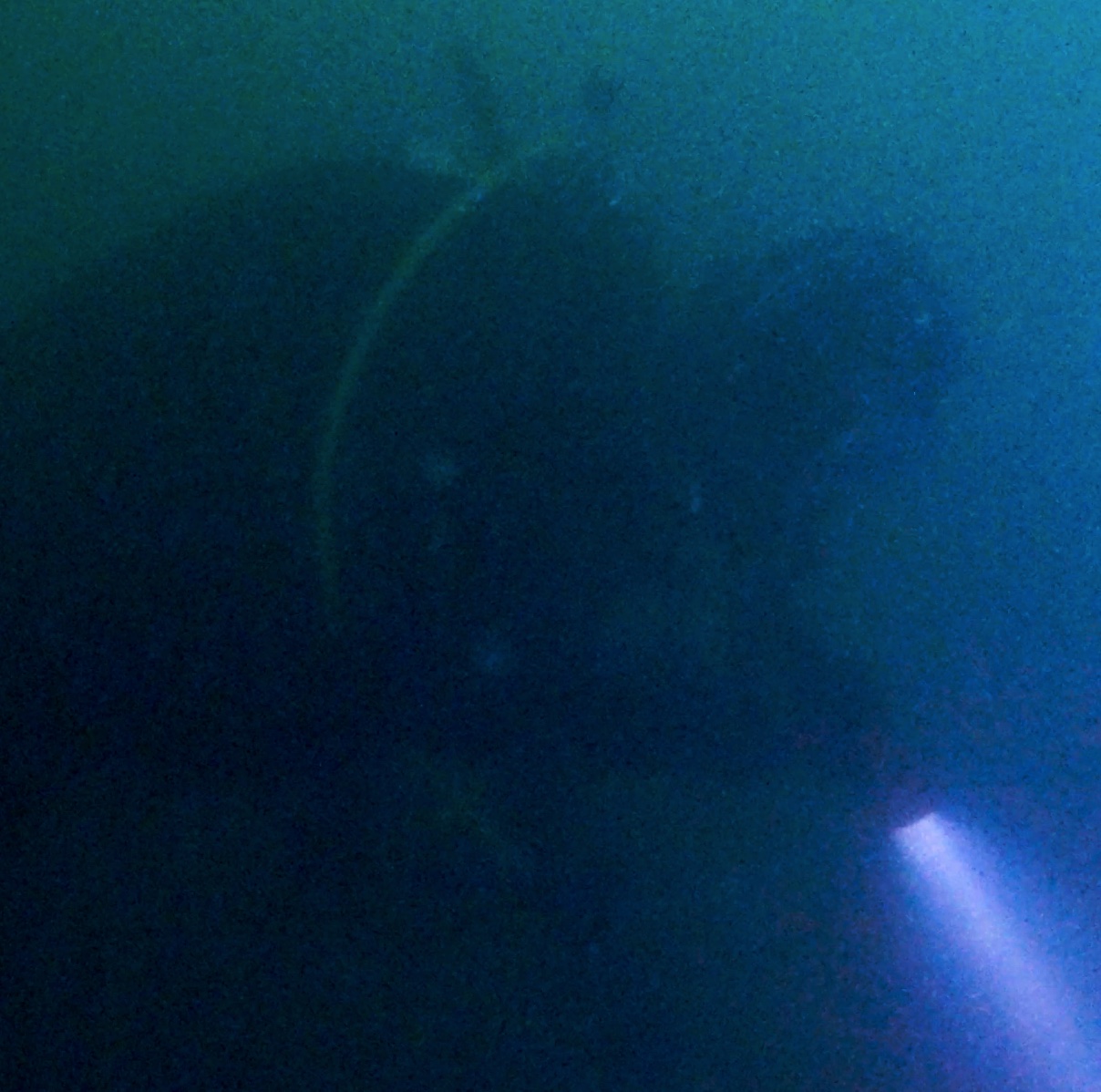 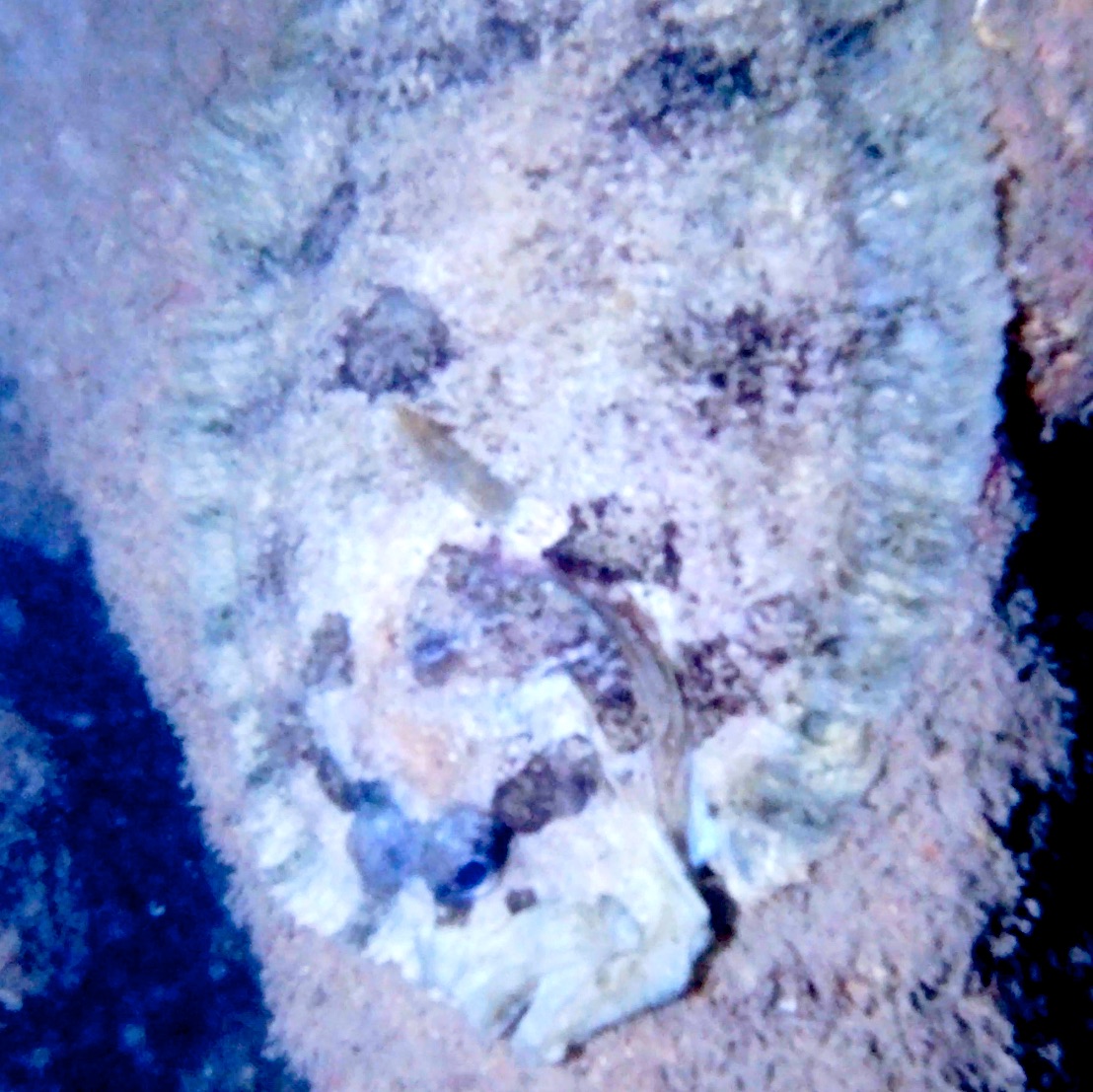 A tangle of metal struts presented a large crab and a wide-eyed flounder that calmly stared back at us making sure I photographed its best ‘side’ (the top!)

Across the predominantly silty sea bed a number of crabs were disturbed by our transit while a conger steadfastly refused to come out of a large pipe. Later we came across a small reef of slanting stones that reminded me of a miniature Mewstone and hid a number of velvet swimming crabs, the reef became very familiar as we seemed to keep returning to it until it was time to ascend. 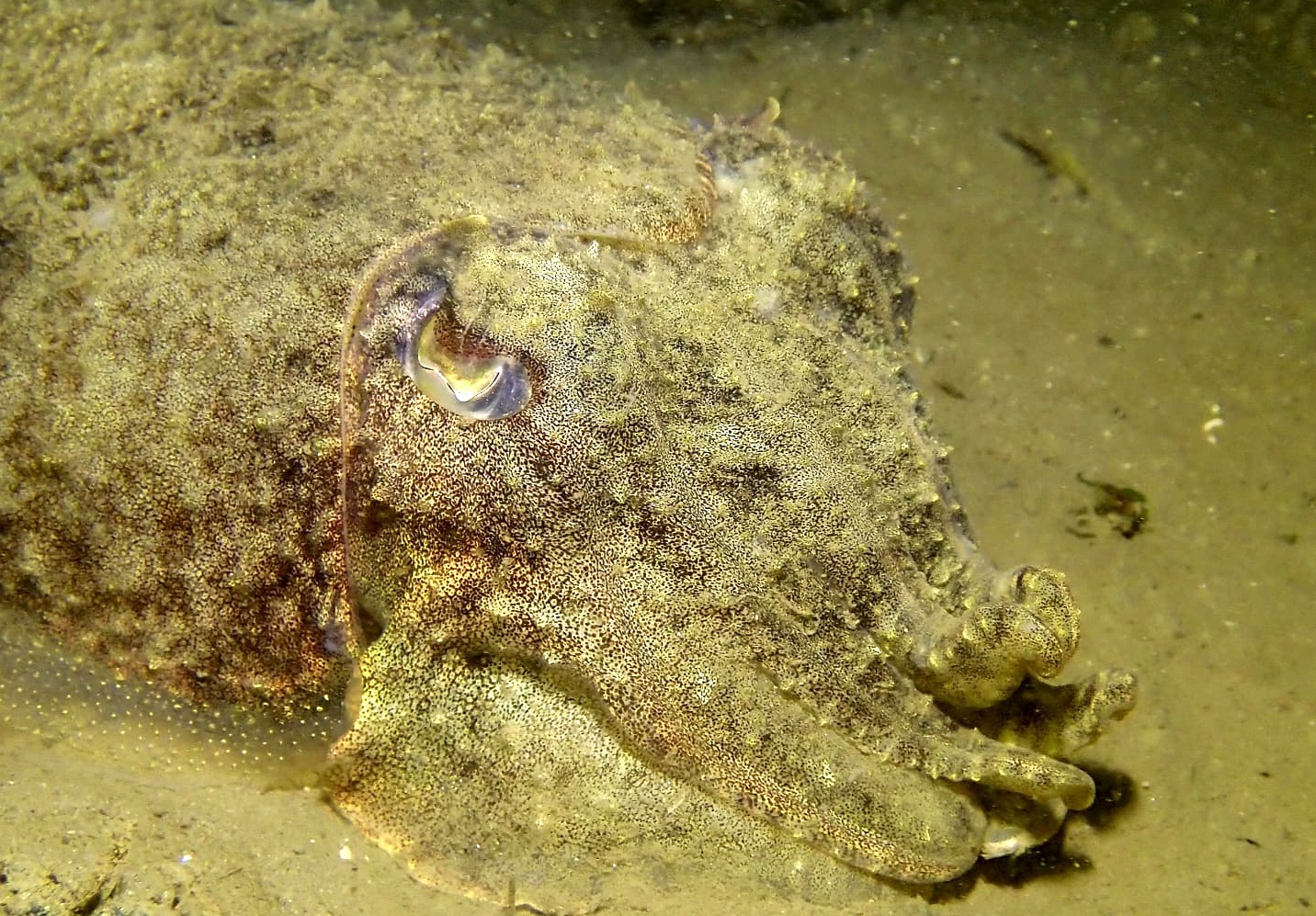 On our return Tim & Geoff reported the slowest circumnavigation of the fort ever: 1 hour & had a pretty good dive with Tim spotting a not very shy cuttlefish & Kirsty reported a similar journey taking in plenty of life on the walls.

2: Barn Pool: The sea was still very rough so we decided the proposed 2nd dive at the Breakwater would be replaced with Barn Pool, a dive Tim & Geoff had done a long time ago but none of the rest of us had.

We motored down to be greeted by mostly flat seas (protected from the southerly winds by the land) & duly went to see what it had to offer.

8 metres took us down to a large rounded rock sea bed occupied by a number of velvet swimming crabs. Venturing eastward and deeper the seabed became silty with the occasional crab & at one point we met Tim heading north. Later we glanced up to realise we’d almost swim into a wreck!  It wasn’t very large, possibly a barge but offered the chance for some examination. 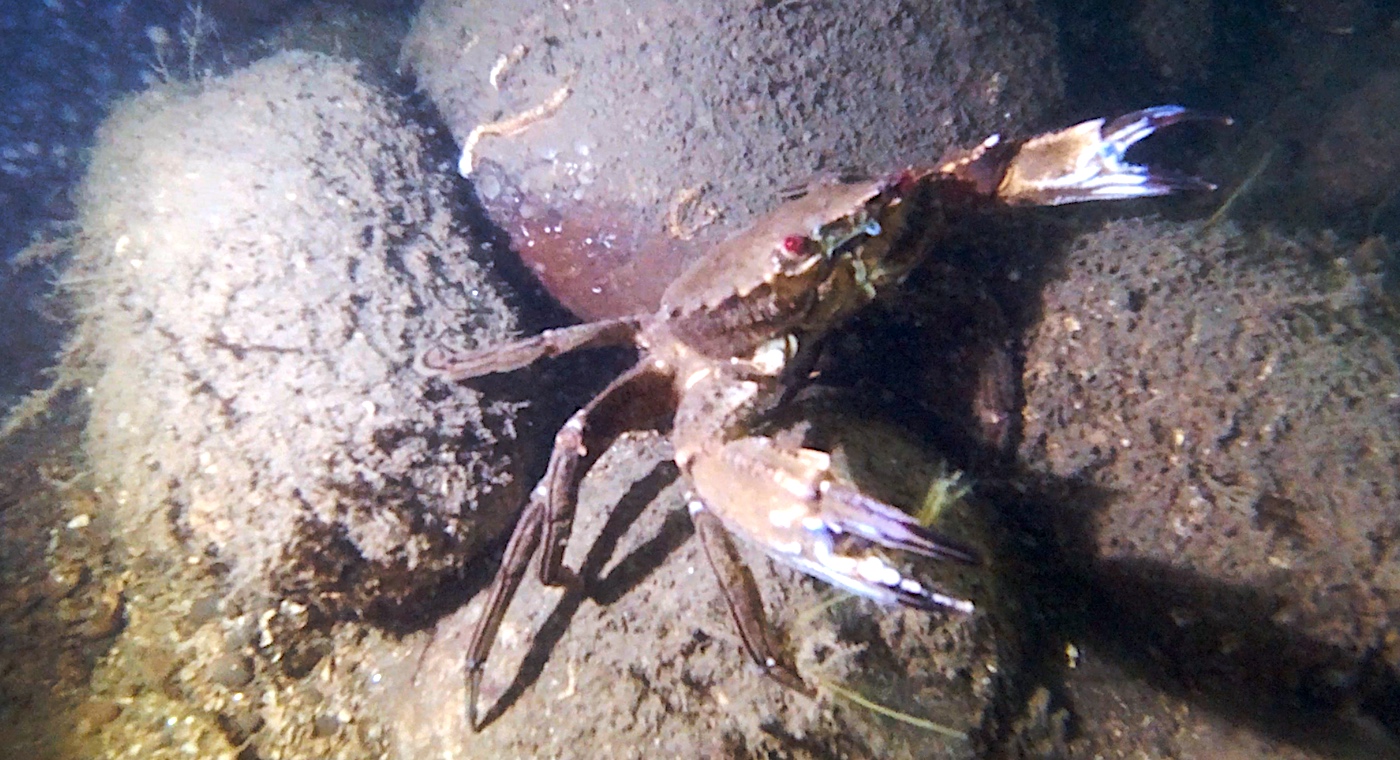 Velvet swimming crabs were very much the order of the day!

We then continued east spotting some fairly large scallops before no deco got low & we turned back. We very quickly regained the rounded boulders & even more velvet swimming crabs until we got so shallow we didn’t need a safety stop & popped up.

Cylinders into aquanauts for fills & back to the b&b for a scrub up. Colin established base camp in the Waterfront & we all made the somewhat damp journey to join him for a hearty pub meal & wide-ranging chat before calling it a night – the rain had kindly stopped for the walk back. 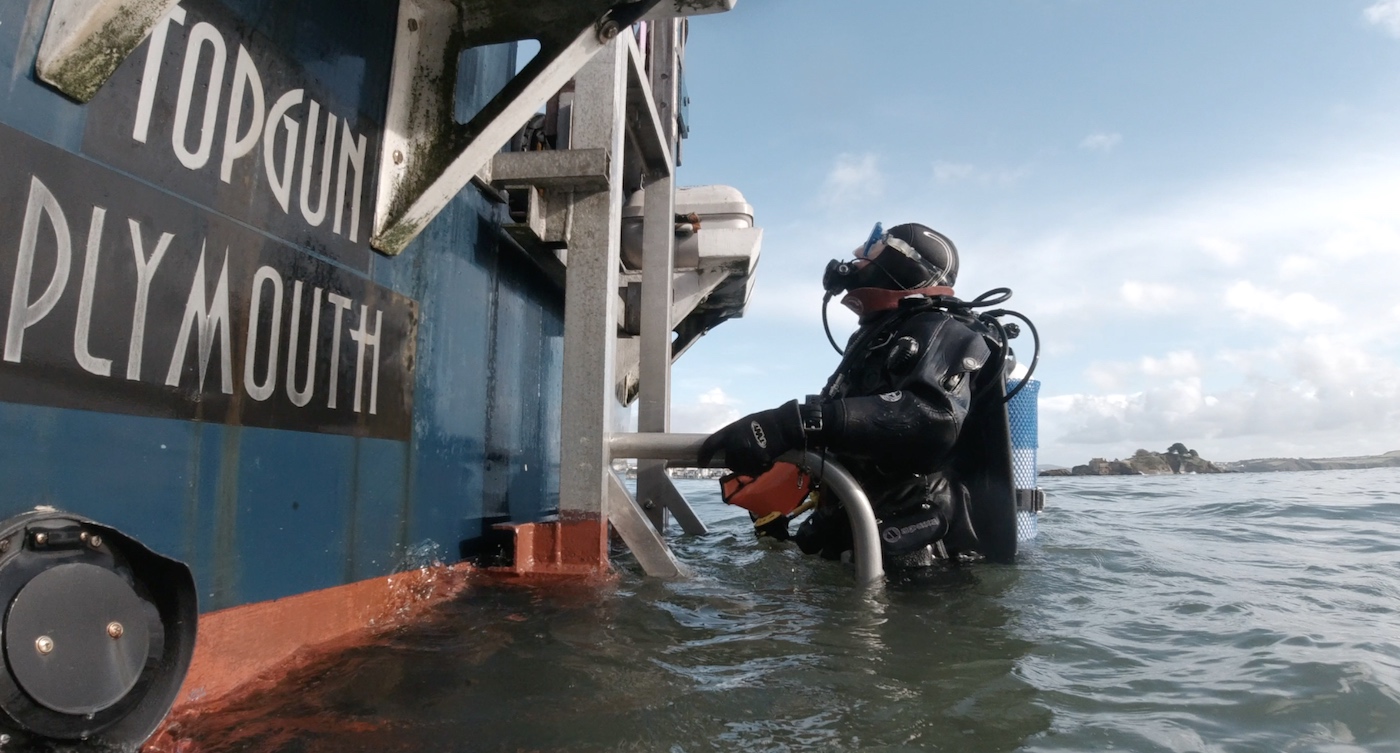 3: Barn Pool: A (takeaway) full English from Kynance House set me up very nicely for the day ahead. Kirsty had kindly offered a lift to our 8:30 meet at aquanauts to load the boat for a 9am departure. 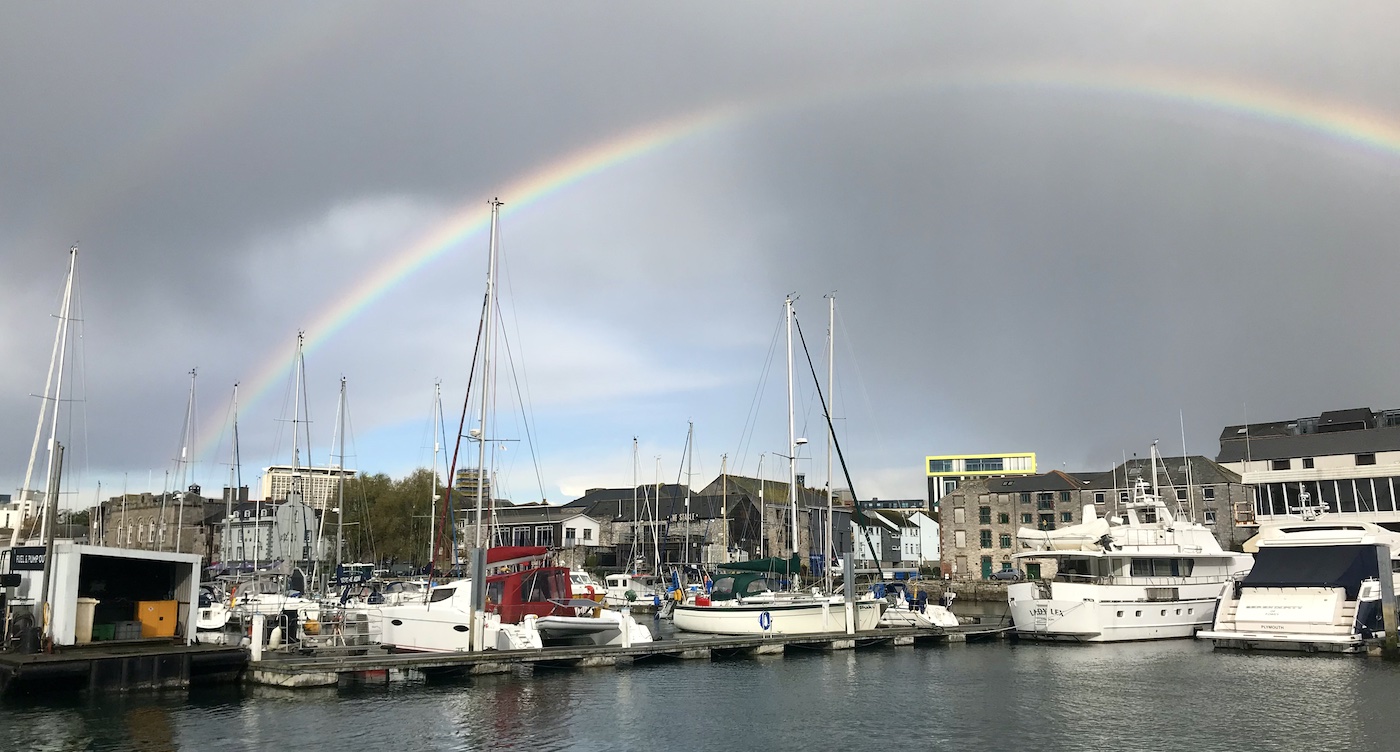 The rain held off while we motored past the north coast of Drake’s island to take in a slightly more southerly section of Barn Pool. After a fairly large military vessel got out of the way our slightly reduced party (Geoff had left us) jumped in to see what we could see and what a contrast!

Yesterday Barn Pool was a landscape of small rounded boulders & pebbles liberally sprinkled with slightly angry velvet swimming crabs & other denizens. Today visibility was seriously reduced so as well as playing ‘follow the fins’ diving as a 3 (with Kirsty diving solo) we had to look a lot closer to spot things.

We initially headed east & the depth increased and visibility improved a little so we could spot a few crabs & fish. Turning to head northerly & reducing our depth to give us a longer dive we came across more crabs & a fair few unafraid prawns in amongst the nooks & crannies.

50 minutes in it seemed a shame not to go for the full hour (and not worth the wrath of Tim!) so we continued our searches then sent up the DSMB ending with a total dive time of 62 minutes!

Then it was a break for snacks before the final dive of the weekend.

4: Devils’ Point: The Waterfront  or Eastern Kings was an option but Gary managed to convince the Long room to let us dive Devils point, a dive I’d done once many a year ago.

In good visibility Devils Point is a stunning dive with a wall bursting with critters of every description and a bottom of equal profusion but unfortunately we didn’t get that so we’ll just have to add it to the repeat list & leave it at that. 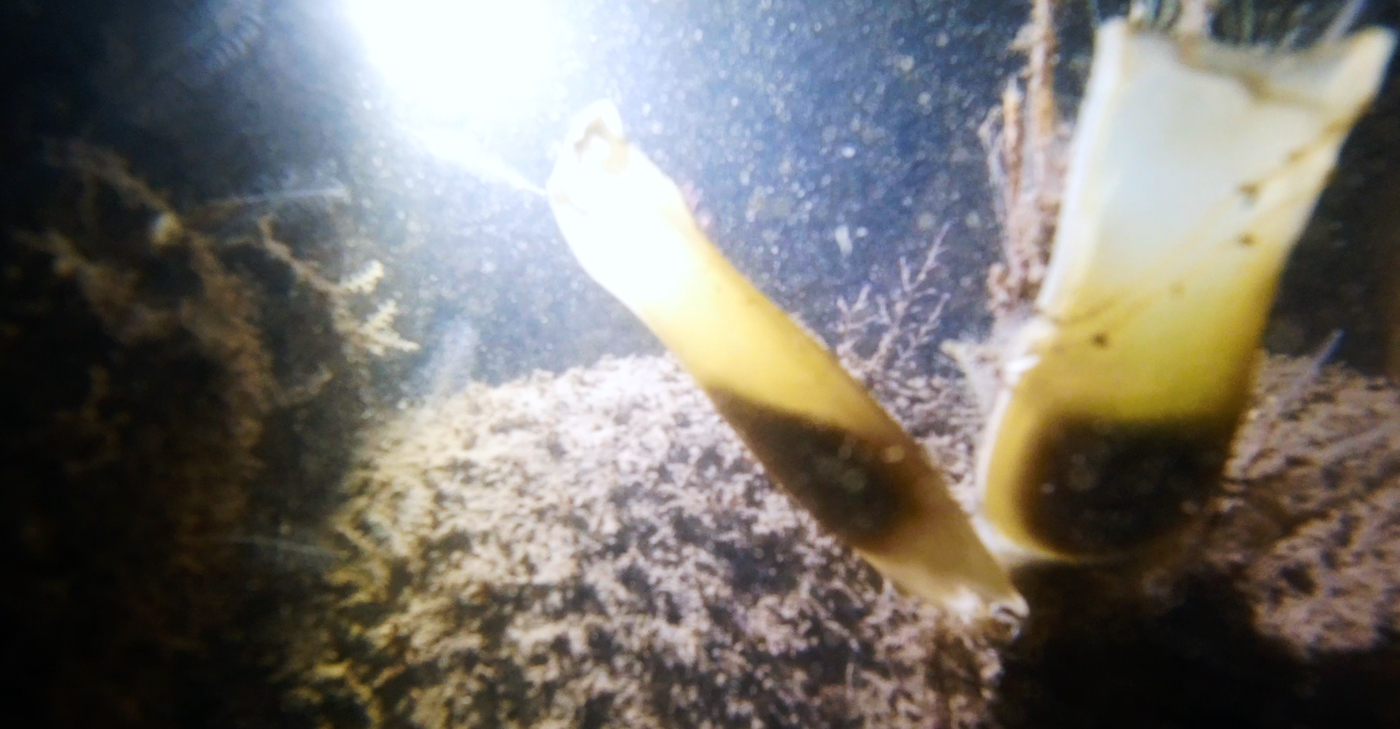 It was very much a weekend of two halves with Saturday offering bad weather but interesting dives & Sunday far better weather than forecast but the diving was less stellar, well them’s the breaks with U.K. diving.

But these trips are about more than just the diving, it’s about sharing a common passion with others of a like mind & Id like to thank Geoff, Colin, Tim & Kirsty for braving what looked like an impossible diving forecast & Gary & Martin for making it possible.

We’ll be back next year, with a few changes – to keep things fresh!

Kevin looks to the future of the Winter Warmer!