A week since the last diving excursion (late August Bank Holiday) so time for the next adventure!

A return (as promised!) to Porthkerris where despite the weather we’d had a solid weekends’ diving with Porthkerris Divers at Porthkerris down on the Lizard in deepest darkest Cornwall. Our party was John & Jan (who went down earlier in the week) & Tim, Chris H, Chris L & Neil who travelled Friday. Though there was a hold-up on the M5 due to an earlier accident we variously arrived mid to late afternoon at the Prince of Wales (where we were camping in the field next to the beer garden – very convenient!) & as per the directive reported to the bar to sample the beverages, no, of course I mean check-in!

Tents up in the otherwise empty field we cracked a few beers before walking through the beer garden to take our places at the table we’d booked for 8pm & enjoyed further local beers & a hearty meal to prepare ourselves for the weekends exertions before retiring early through the dark to our various camping establishments.

Saturday: Misty drizzle greeted us as we emerged in the morning but not to be put off we breakfasted & headed for Porthkerris down the high banked Cornish roads. Arriving a little early we took a walk along the beach until we could check in & confirm our 9:35 boat – the Celtic Kitten, an 8.5 metre catamaran  We made up the majority of the divers with just 2 others (both called Dave), along with our skipper (also called Dave!), a dog (not answering to Dave unless you fussed it & very at home on the rocking boat) & the daughter of one of the Daves (also not called Dave). 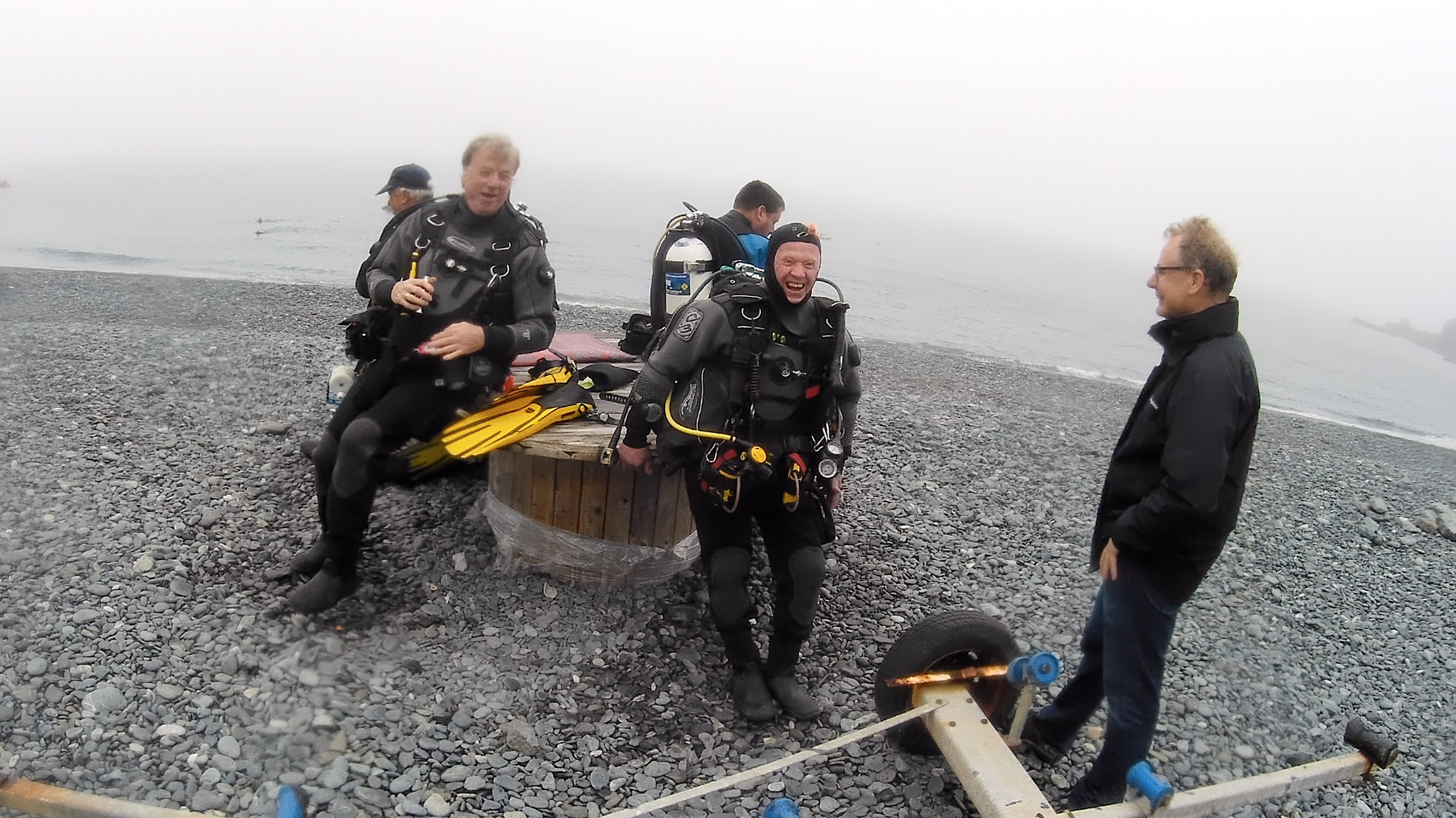 John looks forward to his first dive of the weekend!

I suggested we’d like to do Raglan Reef (having missed doing it last year to a conspiracy of weather & tides) & thus it was agreed & we headed out. 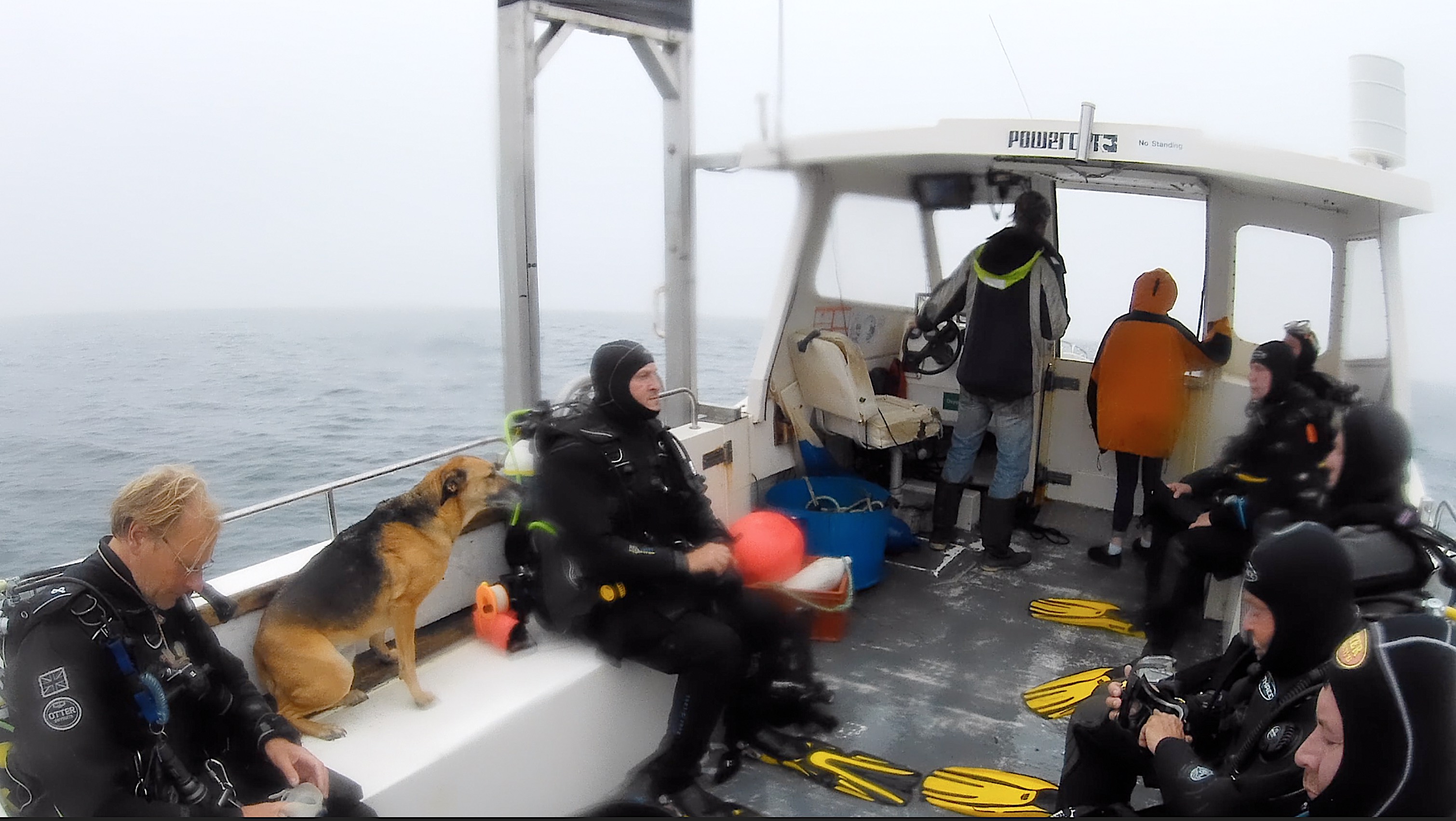 #1: Raglan Reef – part of the Manacles, a group of pinnacles & rocky outcrops at the south eastern corner of the Lizard peninsula that has been the nemesis of many a vessel (see the Mohegan later).

The tide was fairly running so we waited for slack & then jumped in & descended to around 20 metres, maxing at 25. A sandy seabed meant anything kicked up quickly settled & visibility cleared to 6-8 metres to enable us to almost had to dodge the profusion of every kind of wrasse busy about their fishy tasks. We had no particular aim except to bimble around and explore the rocky outcrops & gulleys where we found a profusion of pink sea fans & white dead man’s fingers clinging to most rocks along with a scattering of sea urchins & spiny sea stars.. A final male cuckoo wrasse gave me the eye before we ascended at the end of the dive. 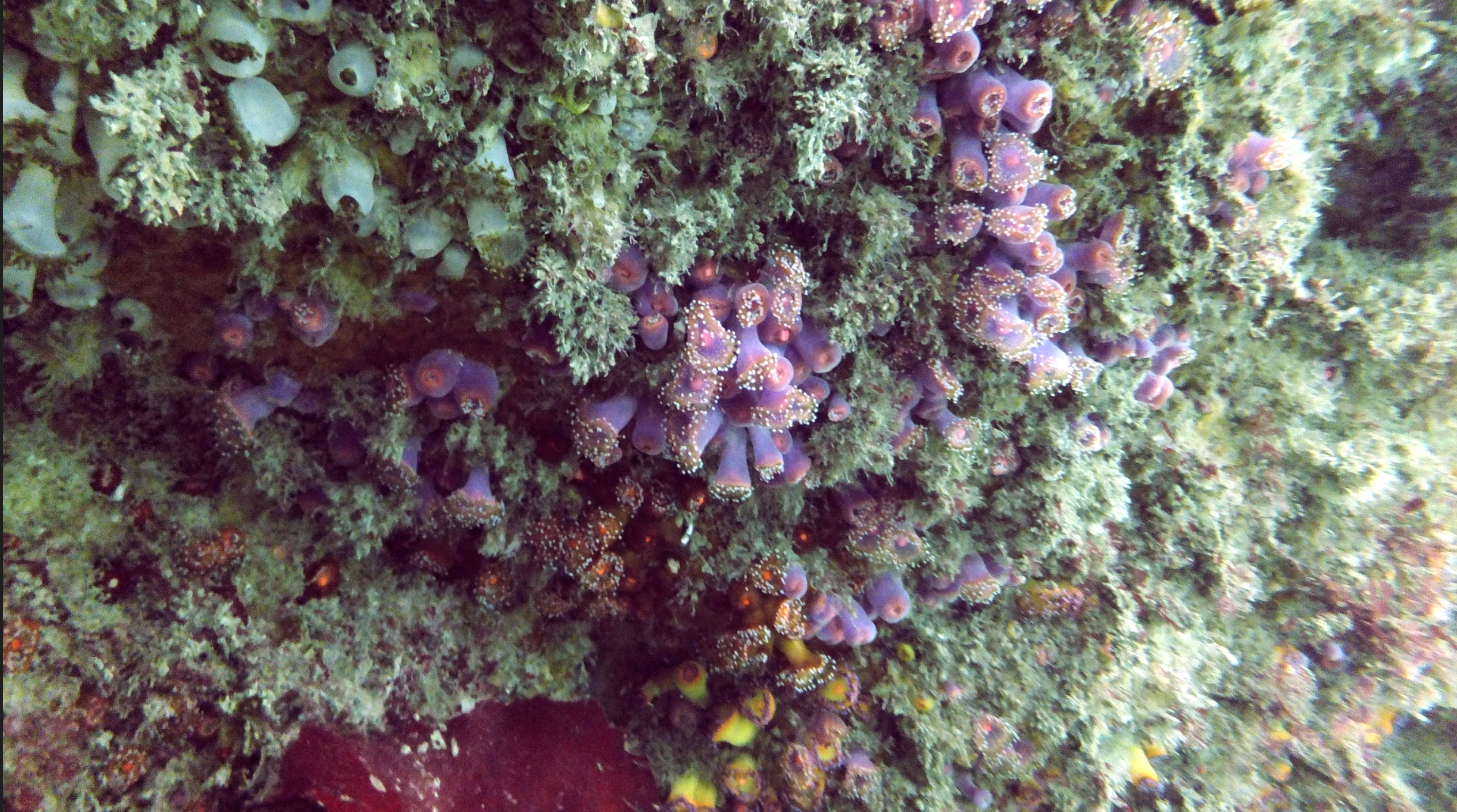 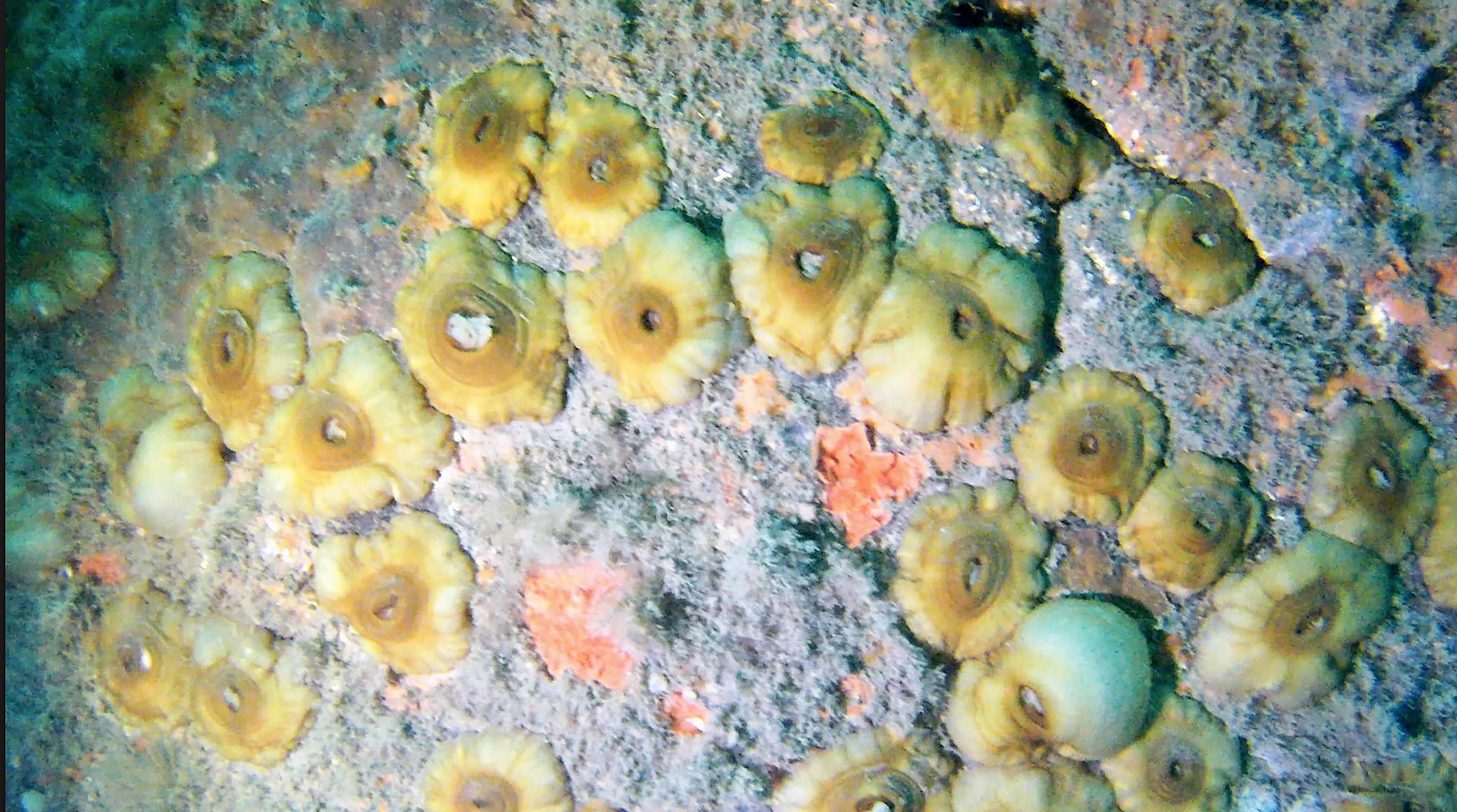 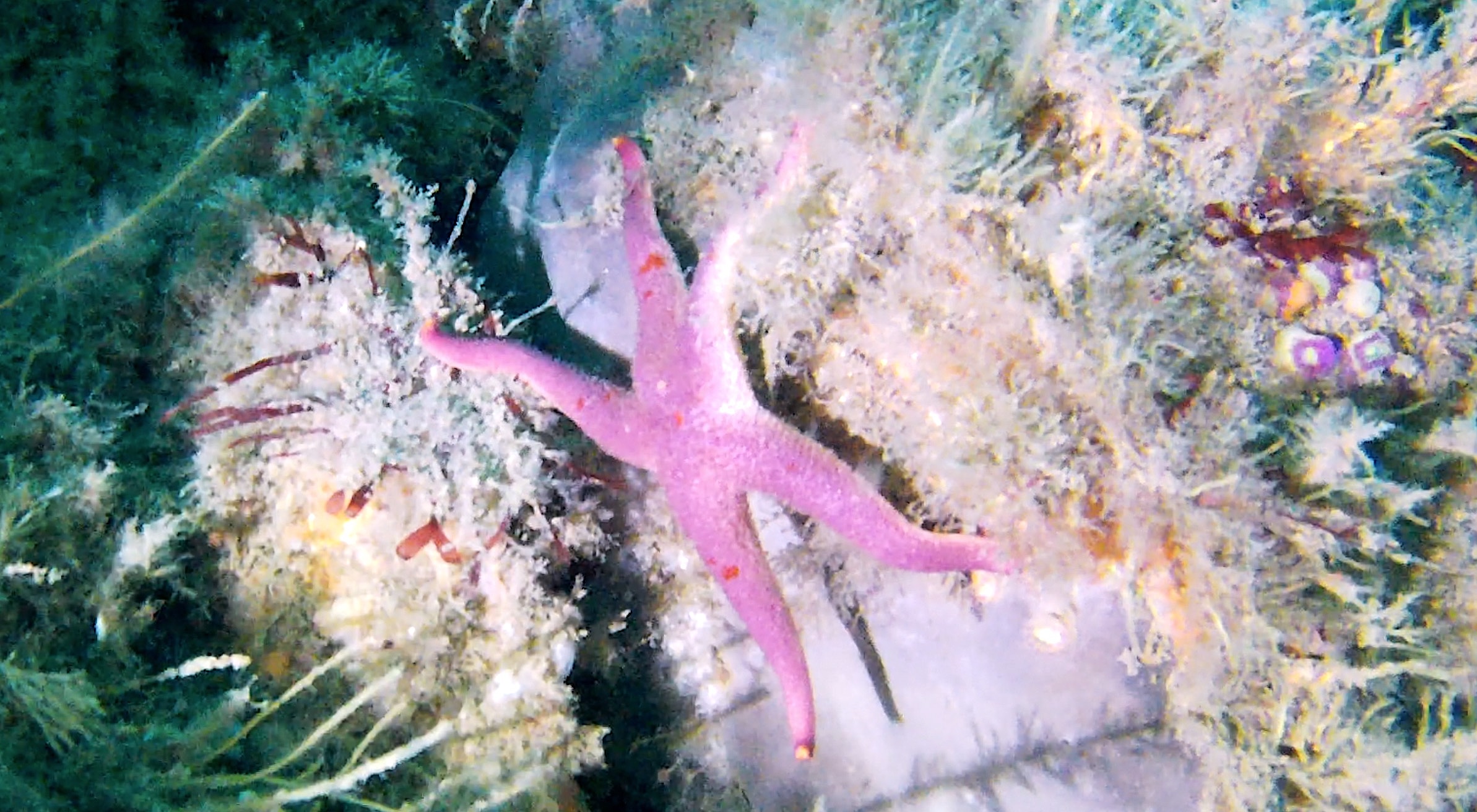 The beauty that is to be found under the sea!

Returning to the boat we found Chri H had aborted due to sinus issues & deferred diving to Sunday so John would join us for the next dive. 15 minutes later Tim & Neil returned from an hour under the waves having enjoyed themselves very much. 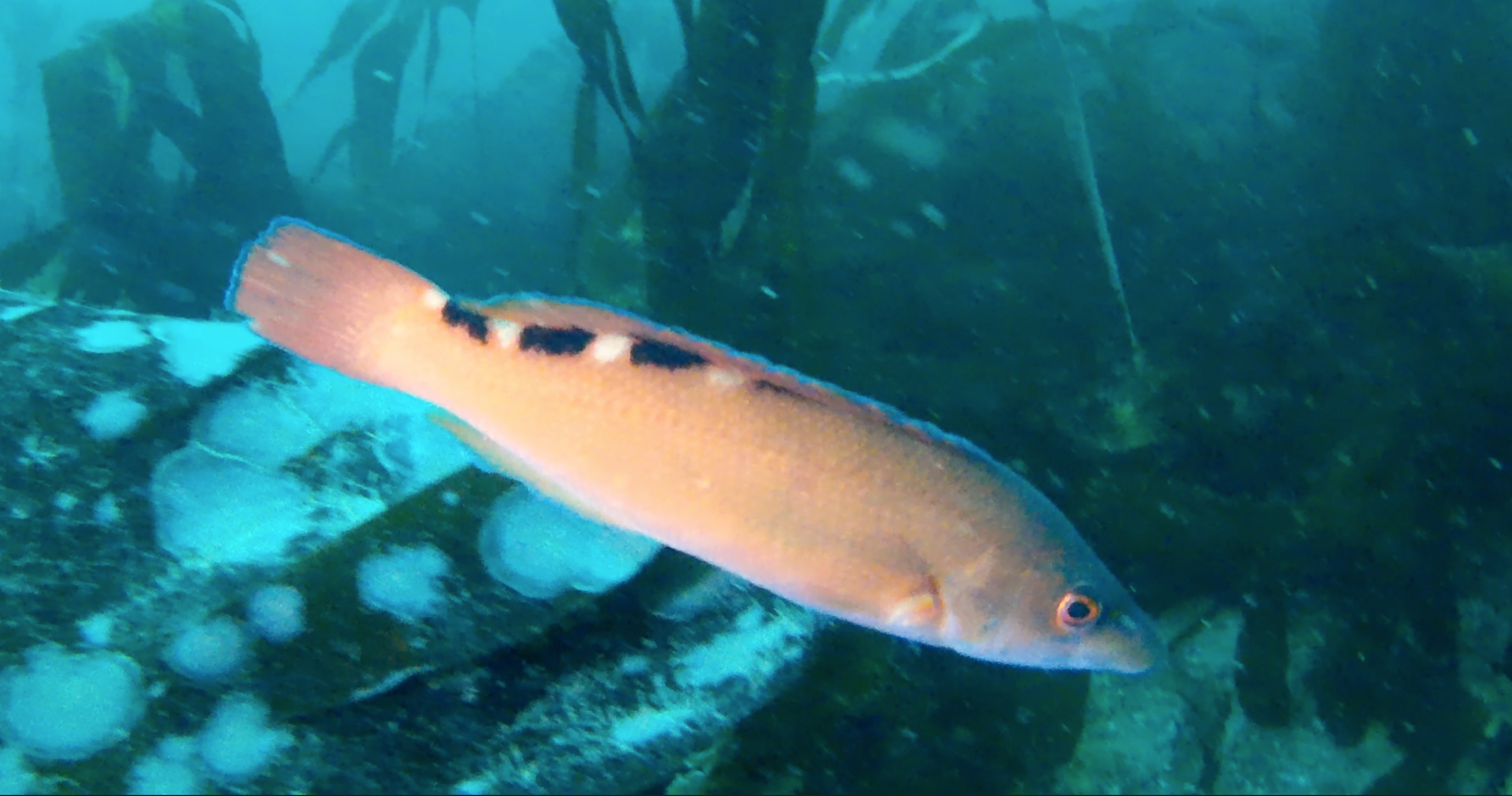 One of the (myriad) cuckoo wrasse that accompanied most dives

A short 10-15 minute scoot took us back to the beach for air fills & variously Egg & Sausage baps, FFS (apparently standing for Fish Finger Sandwich), bacon baps & Johns’ home made vegetarian offering (very nice it looked too) & teas all round. The drizzle continued but under the covered area by the café in our drysuits we were content.

#2 The Manacles – 12:35 & it was time to re-board for a trip to a sheltered area of the Manacles where Dave promised there was little current (and he knows his stuff!). 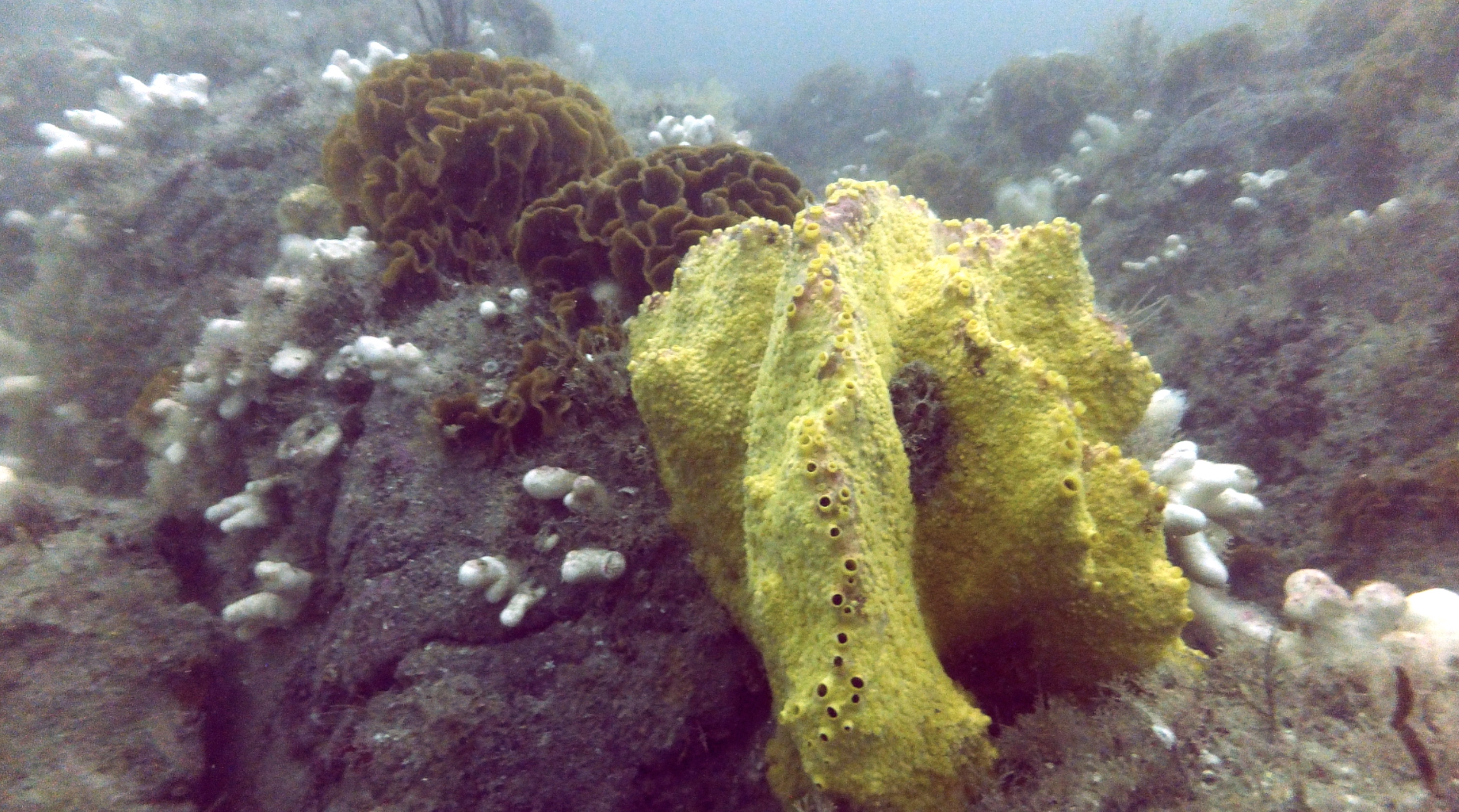 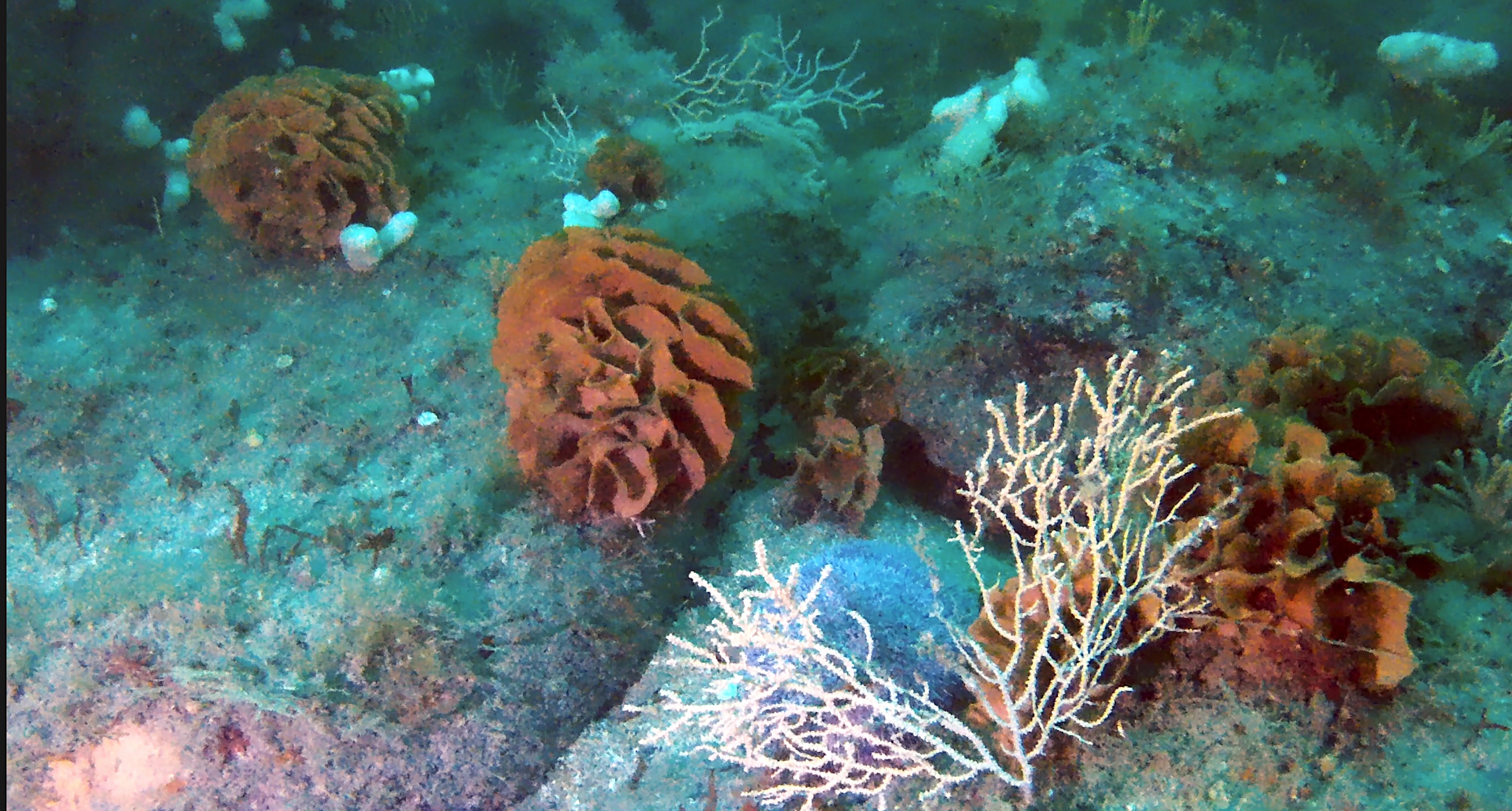 He put the shot into the kelp & advised us to head south out of the kelp & over the edge to the reef proper which we duly did & were greeted with a subtly different environment of walls, boulders, pinnacles & gullies, again all very scenic in a very nice 6-8 metres of visibility

Wrasse were once more evident in profusions of small female cuckoo and larger Ballan swimming lazily among the rocks which were decorated in no small number of white dead man’s fingers, pink sea fans, anemones, urchins & vivid yellow sponges with a few sea cucumbers scattered here & there. My buddy Chris L spotted a largish lobster under a rock that clearly had no intention of coming out! 39 minutes later & we were out having enjoyed a reasonable 15 degrees water temperature & our second good dive of the weekend.

Saturday nights’ meal was at the White Hart in St.Keverne only 5 or so miles away so we got ourselves presentable (the showers at the Prince of Wales were as good as I remember: combining a shower & massage in one!) before kicking back with a few beers. Chris H kindly moved all his kit to the boot so our party of 5 campers could travel in his car – thanks Chris!

John & Jan joined us at the pub & we regaled Jan with our diving tales & she with hers of not very much due to the weather. We selected our meals, Tim pointing to the menu & advising the waitress he wanted a Steak & Ale pie which she started to write down before realizing that isn’t actually on the menu. Chris H’ fish pasta seemed to have a cheese topping (he doesn’t do cheese) which he removed & we advised he should always specify his dishes without cheese (regardless of whether cheese is mentioned!).

Our meal over our chauffeur very ably navigated us back down the twisty (and now even foggier) narrow roads back to the campsite – with a slight detour to collect Neils’ dive light which he’d left at the pub & North Gloucester dive club (who happened to be in) had noticed & secured for him. 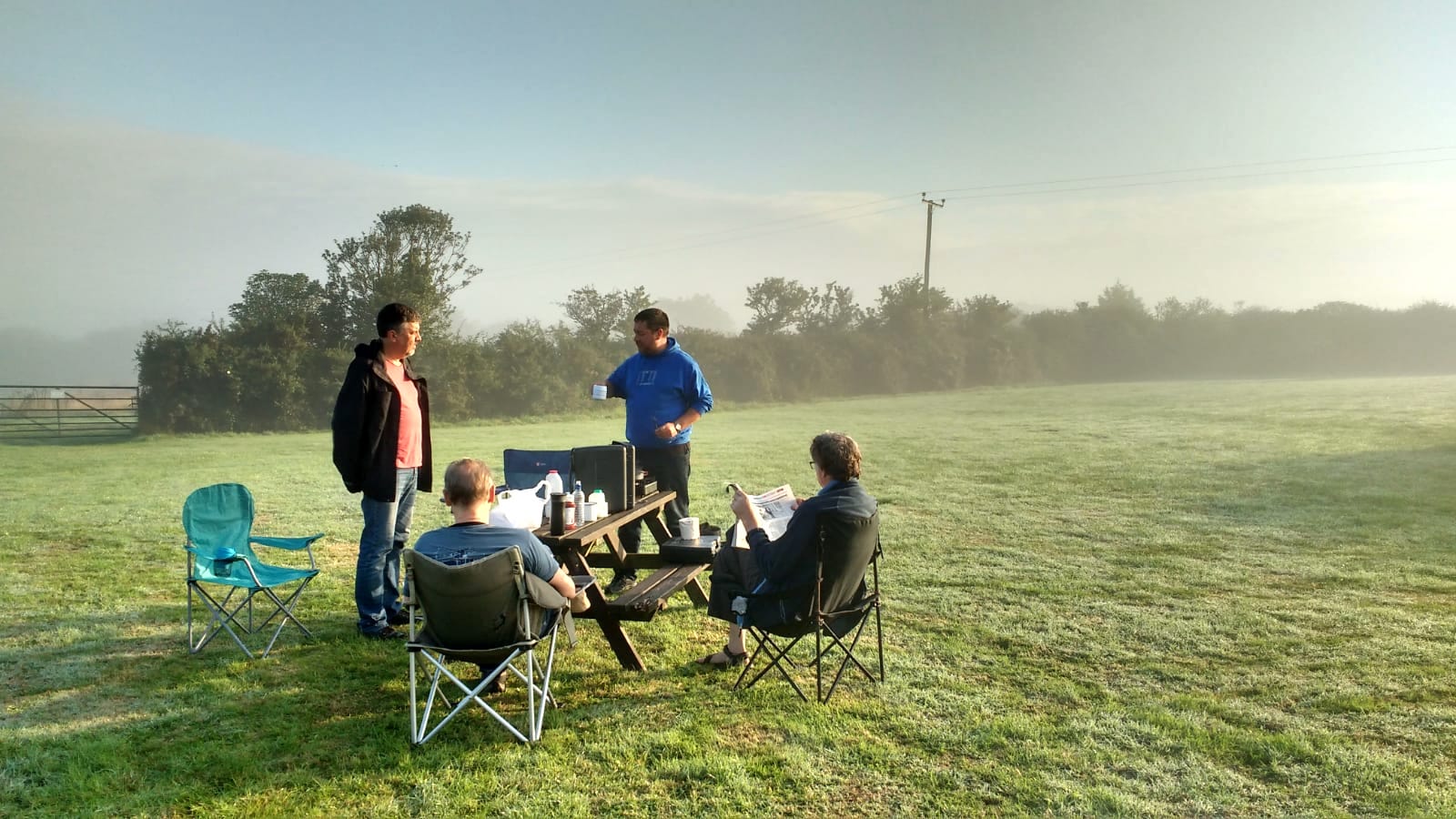 Sunday: A strange orange ball in an alien blue sky greeted us on Sunday morning – the weather seemed to have gotten the right idea! The later start for the boat (10:35) allowed the cooking of bacon baps (brown & white, smoked & unsmoked – we had all the options (except for brown sauce!) by Chris L & H obtained from St. Keverne last night for the price of breakfast for one in the café – we know a bargain when we see it!

Porthkerris was significantly busier than Saturday but we got parked easily enough. A number of Porthkerris staff excitedly pointed out dolphins diving in the bay before we collected our air & headed out again.

#3 – S.S. Mohegan – a victim of the aforementioned Manacles in 1898 when she lost her rudder to Penwin (still there) & large parts of her starboard side to the Voices with the sad loss of 106 lives. The ship was a7000 ton 482 ft liner & though her hull has collapsed outward it has exposed her huge boilers.

This time our boat companions were a group of 3 freedivers who were dropped off first before Dave expertly shot the boilers & we descended to once again to 6-8 metres of viz & the profusion of life we had come to expect – spoilt or what! 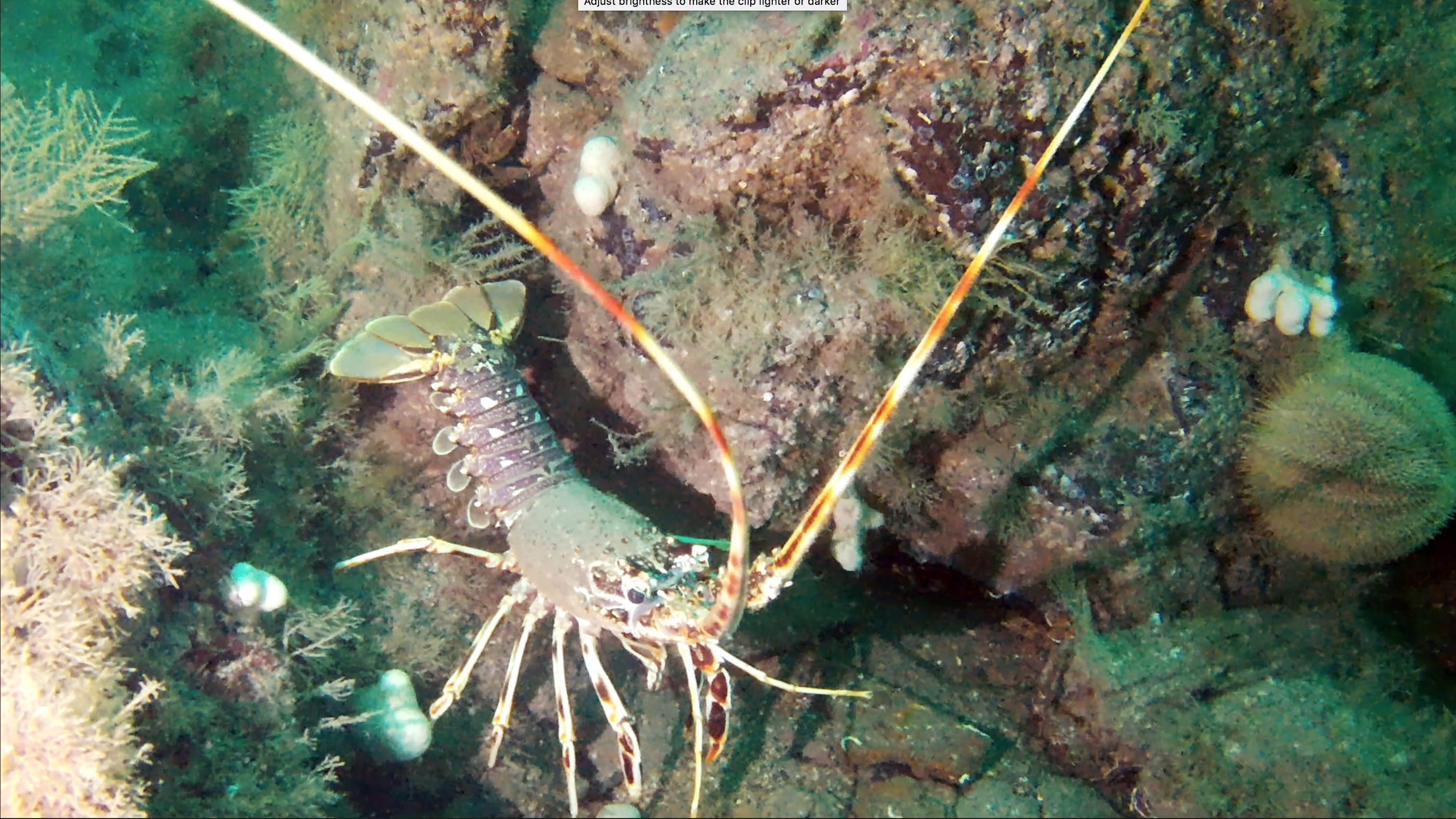 One of the crayfish party members

Neil & I spent a while inspecting the 8m high structures before moving off to the north to explore the scattered girders & struts of the mostly flattened wreckage while wrasse drifted past unconcerned.

Among the created shadows we found a crayfish waving its lengthy feelers at us & then as we left the wreck for the reef in a North Westerly direction a Red Gurnard launched itself from the seabed. As we got a little deeper we were met with a profusion of other crayfish occupying every part of the reef – there was a convention in town! 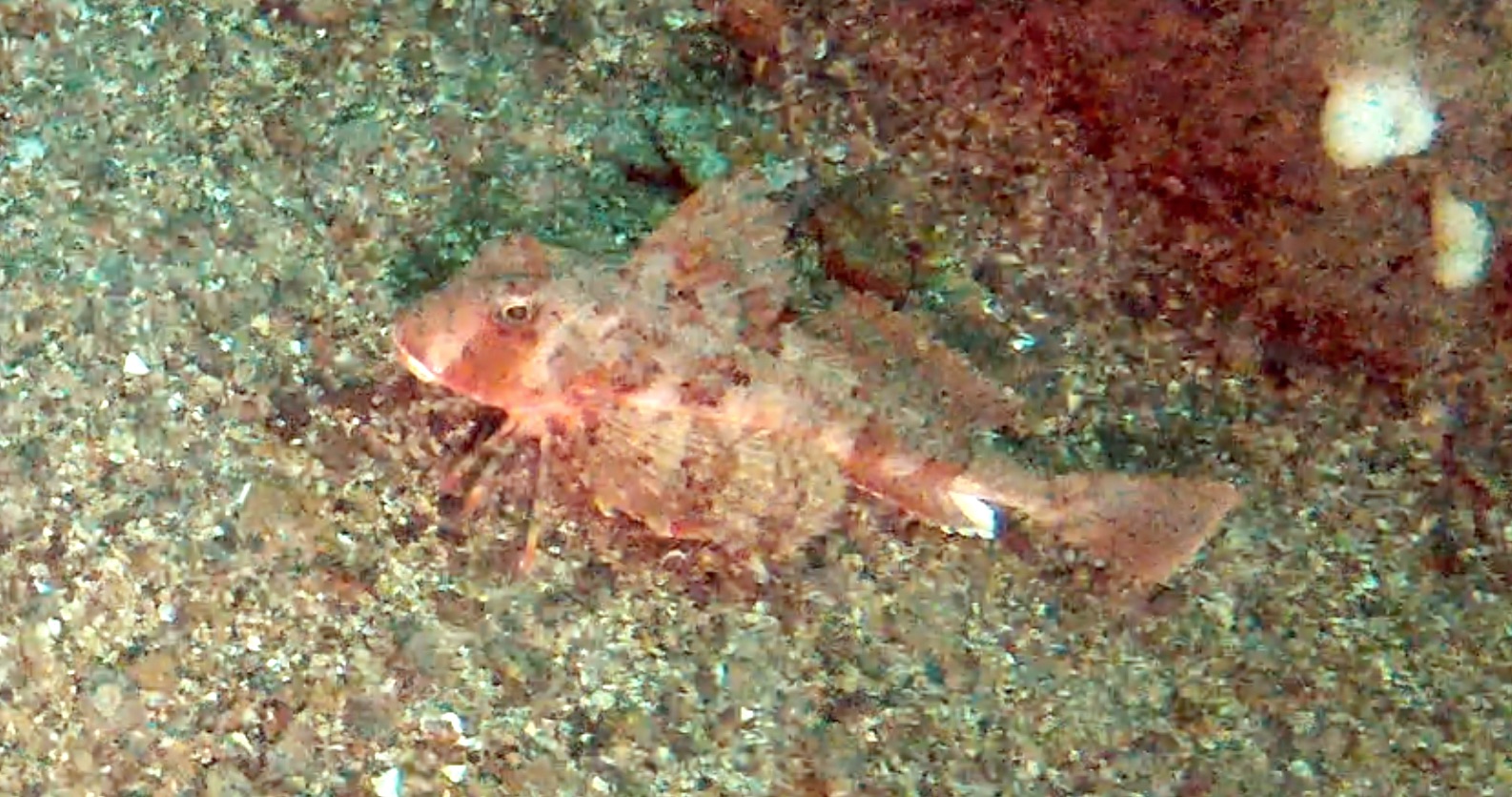 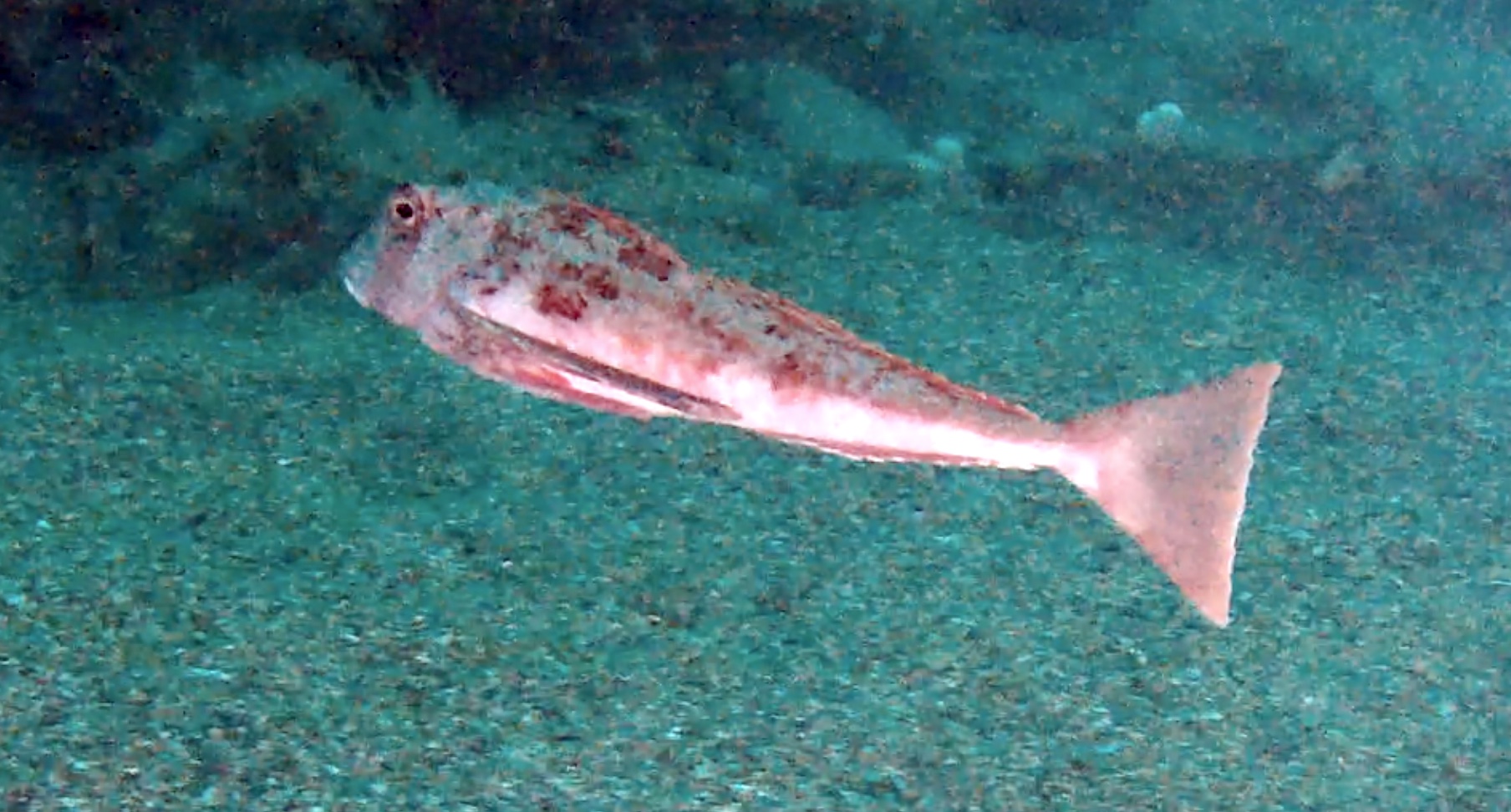 Tim meanwhile made sure his dive with Chris H lasted the full hour to make up for Chris having missed out yesterday, having covered the wreck they headed south to the shallower reef to avoid deco & were glad  they did: it was stunning! Chris L & Johns’ dive was likewise a very enjoyable experience..

Celtic Cat loading divers in the much improved Sunday weather

Slightly later back than expected (due to dropping off & collecting the freedivers) our next boat was 2ish rather than 1:35 so we returned to the café for the obligatory baps & FFS.

The current varied, at times picking up to a fair clip & occasionally dropping to allow us to furkle around among the rocks with their standard carpet of white dead man’s fingers, urchins, sea stars & weed. Crevasses contained smallish crabs while around us swam inquisitive female cuckoo wrasse & the shyer ballan wrasse. Visibility achieved the standard we’d been getting (6-8 metres) for the weekend & so satisfied we headed back to the boat, admiring a Compass jellyfish on the way up. 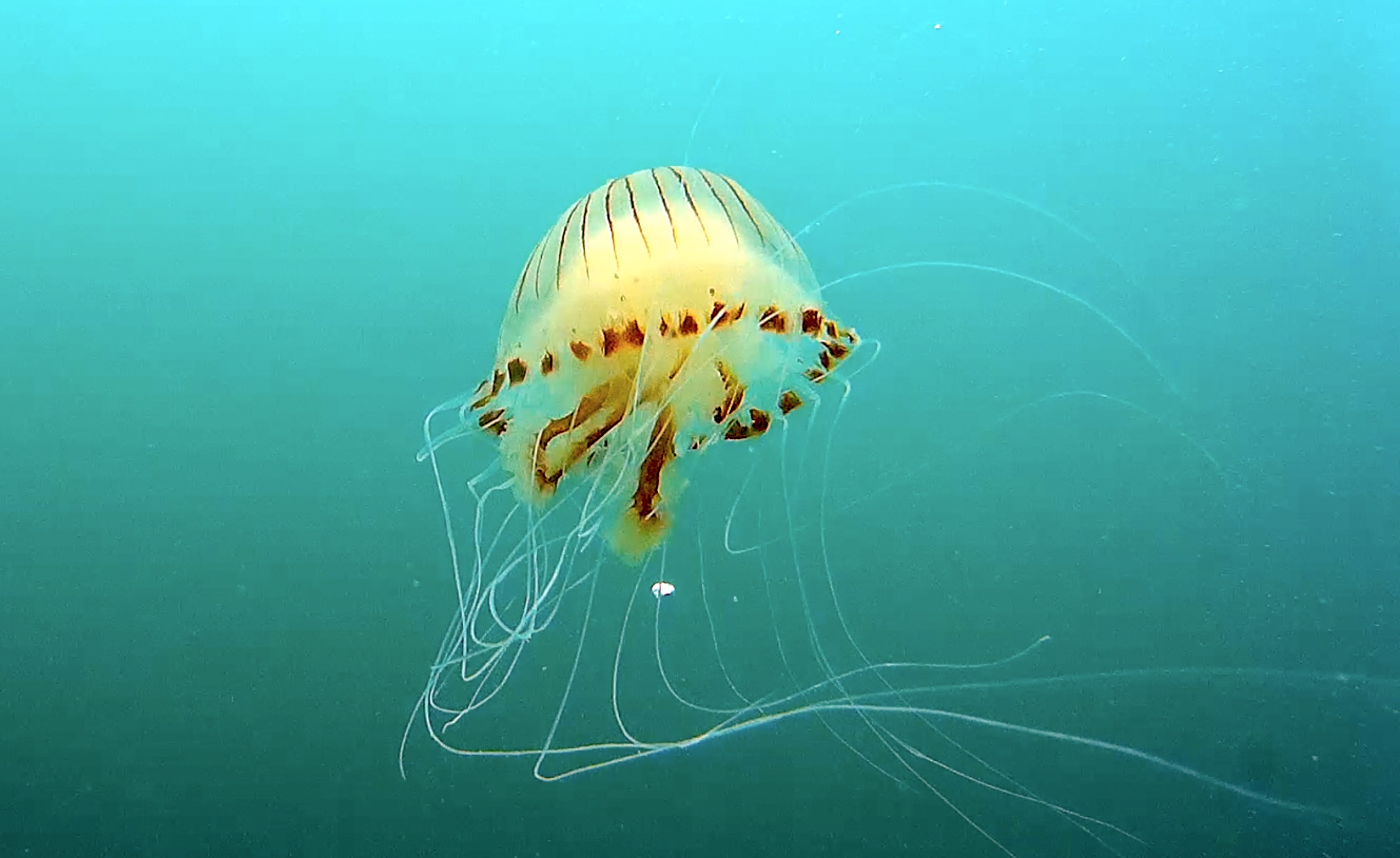 Chris L had a cylinder go missing earlier in the day but located it when he found it in the boot of a diver who had mistaken it for his own – result!

We headed back to the campsite (who’d kindly allowed us to leave our tents up to dry), packed up & headed home – I’m happy to say the traffic heading east then north was kind & we made good time.

All in all I mark this trip as a success & in many ways an improvement on last year (which was good anyway), the visibility was better & Sundays’ weather significantly improved the mood.

I’d like to thank Chris H, Chris L, Tim, Neil & John for joining me in supporting the diving & Jan for putting up with us. Porthkerris divers for providing their once more super friendly & efficient service & the weather gods for smiling on us at the end – lets’ do it again soon!