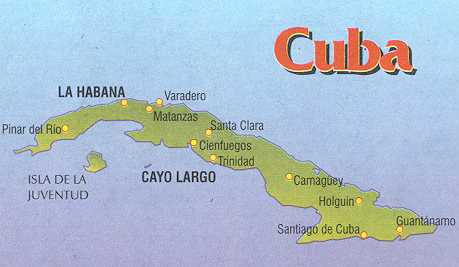 A map of the Islands of Cuba

Cayo Largo is approximately 177 kms south of Havana City and the mainland of Cuba. It is part of the archipelago De Los Canarreos group of islands. Christopher Columbus discovered these islands during his second voyage to the New World. The island of Cayo Largo is surrounded by limpid, calm water of different shades of blue as its depth changes. Combine this with the fine creamy white sand and it all goes to complete the peace and quiet of this island in the Cuban Caribbean that is Cayo Largo del Sur. An island that is rewarded by nature to give plenty of rest to all who visit it. – that is if you’re lucky enough. 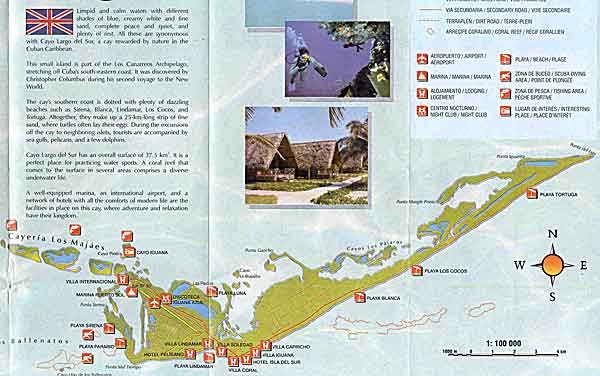 The island has been especially developed for the tourist who likes to do some sort of water sport, or just laze on the beach enjoying the sunshine. Even though this development is still ongoing it has, as yet, not been to an extent that it is spoilt. (This may in part be due to the embargo by the USA and the lack of tourism from this lucrative market.) If you are not interested in water sports and are looking for something else, this resort is not the place to find it. Although there are horse and bike riding facilities available, as the island is very small (overall surface area of 37.5kms2 with lots of mangrove thickets), you could see it all in a very short period of time. For those that might like to laze in the sunshine, the entire beaches on the southern side of the island make up a dazzling 25km long strip of fine sand. For those that are looking to explore the wonders of the deep, a coral reef that comes to the surface in several areas comprises a diverse wealth of underwater life. 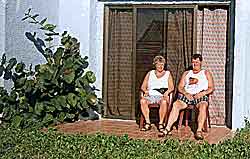 Me and Julie enjoying the evening sun on the patio

Accommodation was very good, with all the rooms having air-conditioning, colour TV (a few American channels, CNN news and Films) and a fridge. The double bed in our room had to be seen to be believed, it was that big we needed a megaphone to talk to one another. (There is a phone by the bed, so you can talk to your friend’s in their room if you want) There was also a safety deposit box, for which you obtained the key from reception. The maid service was also very good, with the bedding being total changed over two days. (The top sheet became the bottom sheet; the bottom sheet was replaced.) There was an abundance of towels if you needed them, with beach towels being supplied as well. 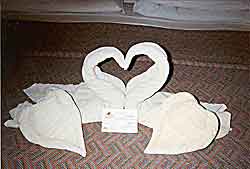 Each day when we returned to our room, we were met with a different sculpture, made from towels, that the maid had created and placedon the bed. The rooms never the less were quite basic but meet our needs, the water for the shower was hot and plentiful most of the time, (we only had one day when there was a problem with it). The swimming pool at our complex was filled with seawater, which was treated daily by the attendant and was fairly shallow at its deepest end. The entertainment (Animacion) staff arranged various pool games if you wanted to take part, volleyball being a regular one, other events were also arranged for those who did not like the water, local dance lessons being popular as well.. The bar and restaurant staff were kind, helpful and cheerful. Nothing seemed too much for them when asked to do something. All the drinks were within the cost of the all-inclusive holiday, with the beer always being cold. 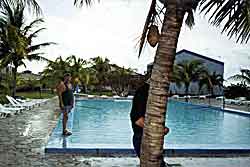 This is the pool. It’s filled with salt water – I’m at the deep end

The only problem with the drinks at our complex was that they came in plastic cup, the sort that you get coffee from a drink’s machine. Drinking water was obtained by purchasing a bottle from the on-site shop, once you had obtained a water bottle this was also refilled for free. The meals were of the buffet style with a variety of both hot and cold foods being available, some being cooked freshly when required. If you are a vegetarian the choice on offer could become boring after a short time, as I was told by some that were. Overall I could find no fault with the service that we received during our stay. The holiday rep was another story though, but that we will keep to ourselves. 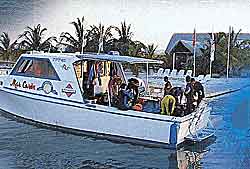 The dive boat that we used

Diving: One of the main reasons we went to Cuba was for the diving, and we were not disappointed in this aspect. We found it to be very well organised, from the pickup at the hotel until the return back again. The varieties of dive site were many and we did not visit all those that were available. Over the 10 days that we dived, we only re-visited one actual site again, although to be fair, some were very close to others. The dive boats we used had a large clear space astern of a cabin area, with a shaded part if required. Your kit was stored around the side of this area underneath the gunwales, which were also used as seats. Our air bottles were 12lts heavy steel, so very little weight, if any, was required (4lbs being the norm), these were supplied by the dive operator. 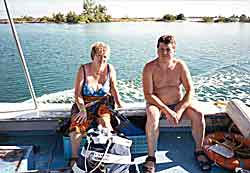 We would leave the quayside at the Marina Puertosol and stop en-route to pick up the bottle from the air station that was a short distance from the harbour entrance. This station broke down during the second week, so the dive operator repaired the one at the dive shop, so the bottles were ready for us at the quay from then on. A word of caution, always remember to check the quality of your air, as we had some bad fills just before the air station broke down.

Our dive guides were excellent and they put everyone at ease with their attitude and dive skills. The briefs, although a bit sparse, gave us enough information for the planned dive ahead. The main point of these briefs being our depth and air limits. All of them included signal’s for air levels and the safety stops, with times at depths, which were to be carried out. 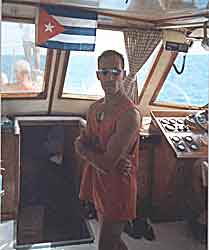 This became a bit of a joke in the end, as we took the mickey out of Carlos (our main dive guide) when he ran through them prior to each dive. (We all mimicked him as he ran through them, but he took it in the manner that it was meant.) The dives consisted of us playing “follow the leader”, but in a very loose manner, our dive guide would check to see if we were all ok and within eyesight, otherwise we were left (within reason).to do what we wanted. Their main job seemed to consist of shaking a small tube that they had around their necks whenever anything of interest came within sight, this might be Eagle Rays, Sharks, Turtles or something just as exciting.

They would rattle it and point in the required direction; this way very little was missed. (This was another action that we decided to mimic later on, much to our amusement and Abel’s – our groups guide – puzzlement). There were a variety of different dive sites to tempt us all, walls; drop-offs; reefs and wrecks were all there to be explored.

The wrecks were very sterile and had anything of use salvaged. There was very little growth in evidence on them although having been sunk for some time. As there was so little growth the fish were also sparse, but around the actual reefs that brought about the wrecks demise, there was an abundance of life. 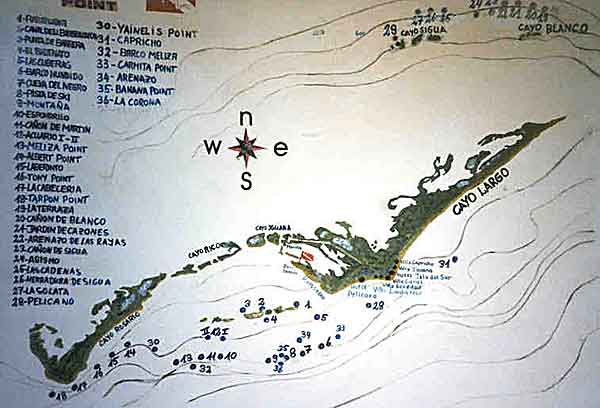 This was changed on a visit to dive site 42 (Aquara I & II) where we were greeted with wall to wall fish, numerous varieties in large numbers as well as size, which were all around us to be looked at and impressed with the range of colours on show. 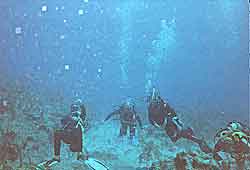 Mary giving the 50bar signal, being watched by Tony (her husband)

As the days rolled on and everyone became familiar with each other, a relaxed atmosphere developed which added to the overall enjoyment that was experienced on the boat trips to and from the dive site. One memorable trip was the one when the spontaneous singsong developed between those on board. Martin (another guide) was playing the bongos, on an improvised waste bin, whilst everyone used their rattles (empty film canisters filled with a few coins) in time to the beat of his drum. The song that was sung was ‘one-ton-of-melons’ (not the correct title, but you can guess what it was) and that was on the way to the dive site. 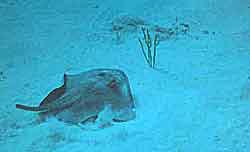 A ray exploding from the sand as I swam above it, Scared the s**t out of me. 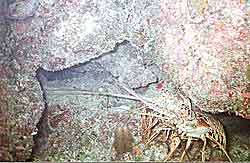 This could have been lunch, but these Crayfish knew better

Overall I could not find fault with this dive operation or operator, but if I had to be picky, I would say that the mid-day return to the hotel (approx 4hrs surface interval) every day could be changed for an occasional stay on board the boat instead. This would then have allowed us to visit some of the more distant sites. 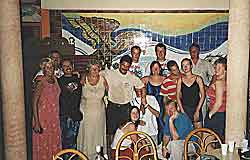 I would recommend this resort to anyone looking for unspoilt easy diving, with a relaxed but efficient operator. The down side of it all is the 9 hour flight to the Cayo Largo and the island hopping to Havana on the return flight (18 hours in total for us due to our 7 hour wait in Havana airport’s departure lounge).

I would like to thank our new-found friends for making this trip what it was.