Hot sunny weather, eco-friendly accommodation with amazing sea views and bar, relaxed diving with seals and dolphins, where else could we be but Portland?

After a late change of plan, we took the small club boat to Portland Harbour for a couple of days of diving.   The drive down via the M5 and Yeovil on Thursday morning was surprisingly uneventful, and we arrived at the Weymouth and Portland National Sailing Academy just after nine.  As we were waiting to buy our harbour permit, dive permit and pay our launch fees, Pete arrived, shortly followed by Tim and Geoff.

The staff were very friendly and after a quick cuppa at the café, we were sorting out kit in the car park ready to launch the boat on the very nice slipway shared with some very expensive Sunseekers. A quick drive back to the car park and I was soon picked up from the pontoon on the way to the Countess of Erne.

Tim Pete and Geoff dived first, leaving David and I in the boat.  After a few minutes, we were surprised to see a seal swimming along next to the harbour wall.  It disappeared not far from the divers bubbles and we expected that they would have had a visitor.  Soon after, there was a splash of the bow.  Looking round for the seal, we were very pleasantly surprised to see a dolphin.  We watched it swim past the boat, over the divers and into the harbour.  It was soon joined by a friend as they followed a sailing boat back out of the harbour.

Our divers were soon back on board, I believe Geoff’s fins had new seal teeth marks in.  Yes, we did believe it, but had they seen the dolphin?  No, of course not, that must be a joke. 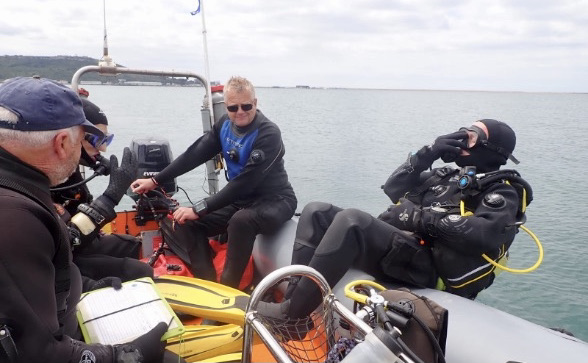 Me (Rob) falling backwards out of the boat – on purpose (photo: Geoff)

David and I had a nice dive on the countess, it was as murky as usual near the bottom, bur the bow was quite clear.  Now that it is starting to break up, it looks pretty and has plenty of nooks and crannies for confident Tom Pot Blennies to own.  We also saw some flamboyant Black Face Blennies, most of them romancing their camouflaged females.  A few nudibranchs later it was time to come up. 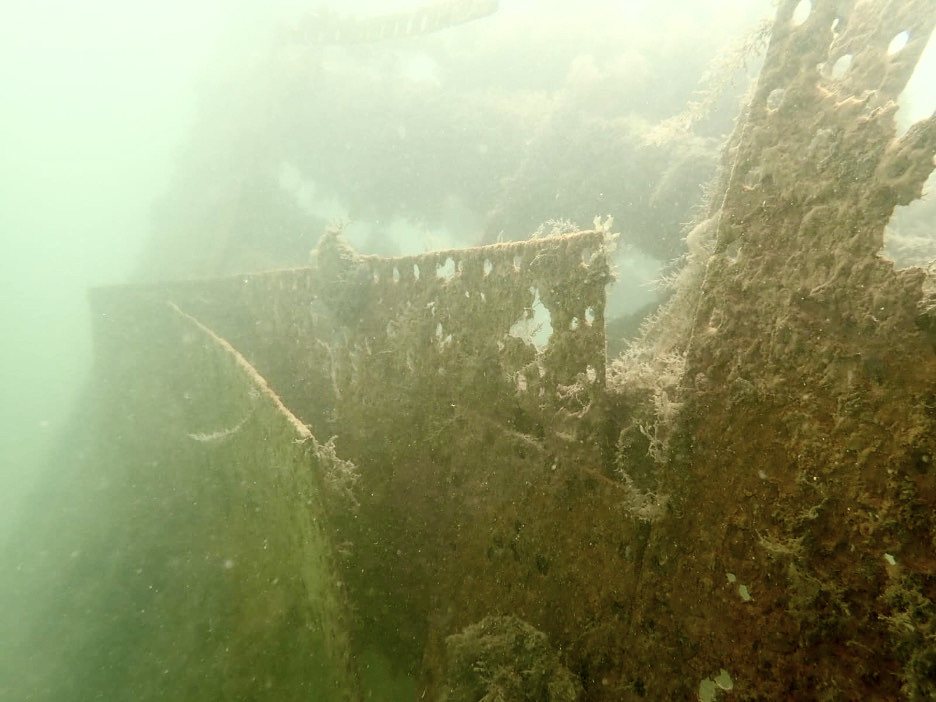 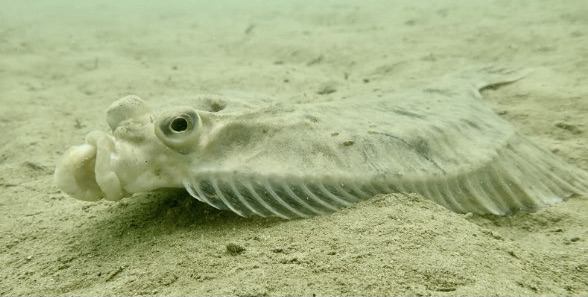 Everoyone agreed it was a pleasant dive.  Back to shore for a quick lunch and we were soon heading for the new(ish) sculpture trail just outside the breakwater.

Our illustrious trio did some excellent navigating to miss all of the sculptures to find the dredger.

David and I had more success. We nearly landed on a beautiful little ray. 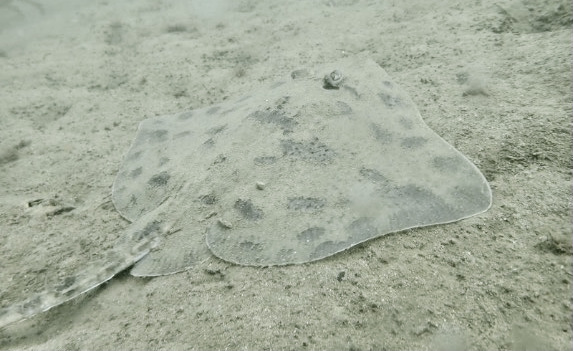 After finding and following some lines, we found shark, now covered in light bulb sea squirts and baby spiny spider crabs.  More line lead to giant rings covered in similar fauna.  From there to a naked lady. The sandy bottom was scattered with hermit crabs in whelk shells, the odd whelk had managed to keep its shell as well. 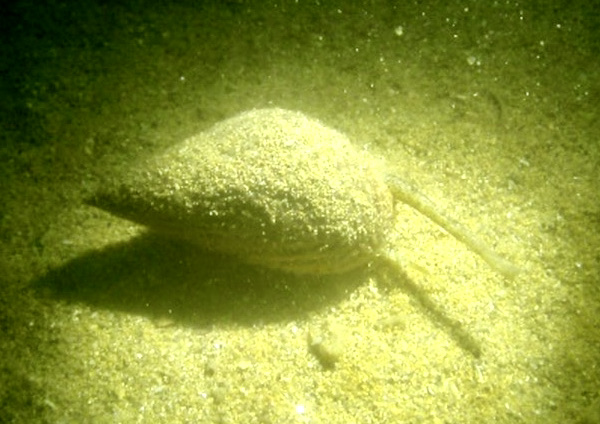 NOT a hermit crab (photo: David)

The last objects were a couple of pillars, from there we headed along the wall to some wreckage where we made our ascent, we had missed the dredger finale, but had a nice dive. 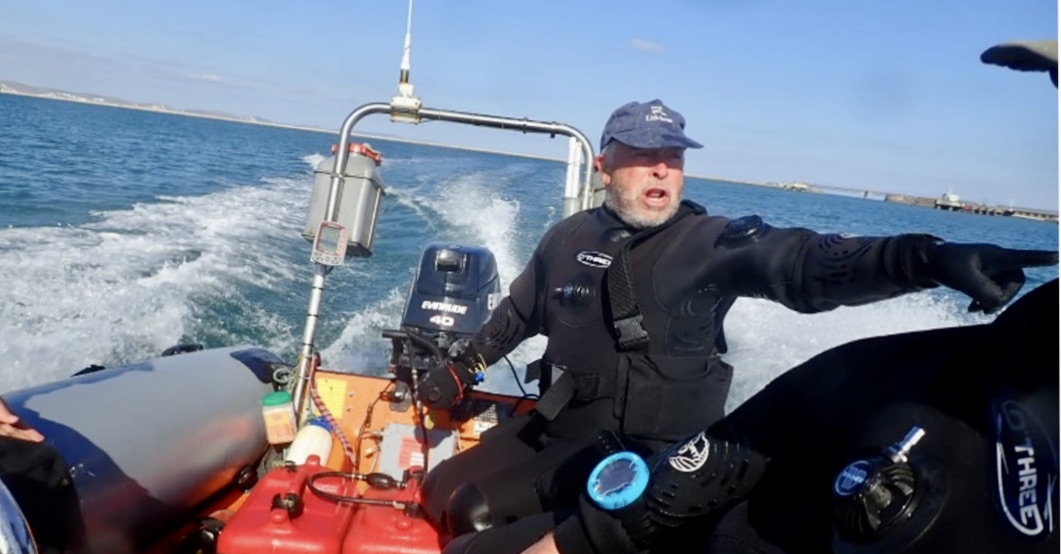 We were escorted back across the harbour by two dolphins. 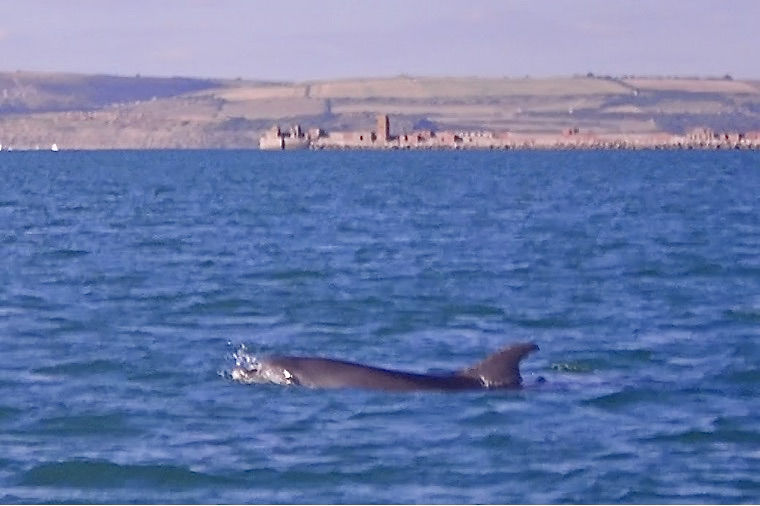 Recovering the boat was easy, Pete was soon on his way home and we were soon at the Donkey Down pop-up campsite overlooking Weymouth and the harbour.  Tim and Geoff had a burger and pint of local cider from the bar while David and I had fish and chips from the chippy five minutes down the road.     A couple of pints as the sun went down and everyone was ready for some sleep.

We were soon packed -up, fed, watered and back at Portland. 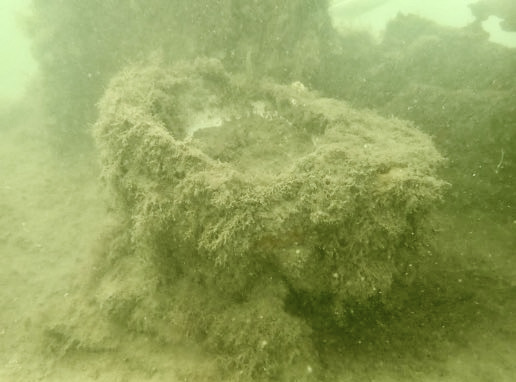 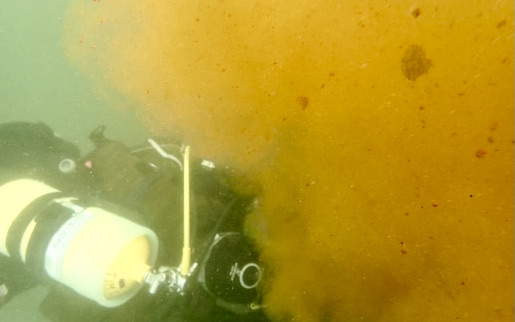 After a tour of the harbour to collect our dive computers from the car, and another dolphin escort, David and I were soon trying to find two landing craft by the North Entrance to the harbour.  We failed to find anything but silt and ended up exploring the hollows between the blocks of the breakwater instead.  We did see a few more blennies.  Not the most exciting dive until we found something that looked a lot like a bomb!  Time to go.

After a bite of lunch afloat, we headed back to the sculpture trail.  David and I had a rummage around a crab pot line in Balaclava bay.  Much better viz and different creatures to find around the rocks, much more scenic. 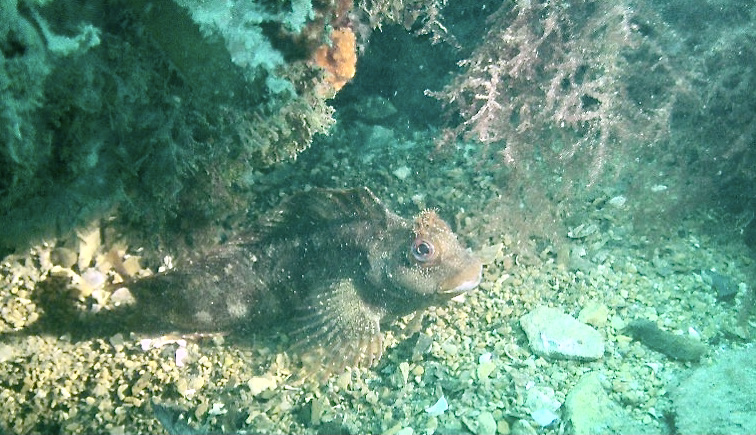 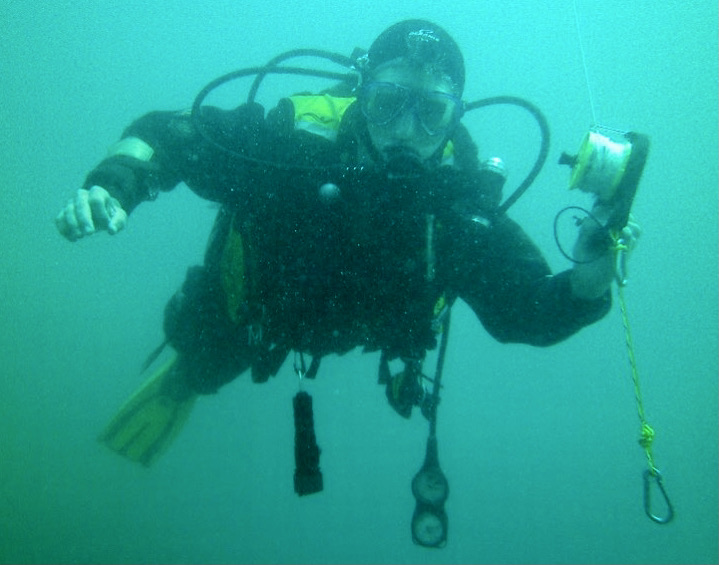 Tim and Geoff than dived the sculpture trail.  This time finding at least some of it.  Reports of scallops , ray and plaice.

We all agreed that there are some nice, easy, enjoyable dives around Portland, there is definitely more to do.

Geoff was talking to a local diver who regularly enjoyed a drift dive around the bill, he was only 79 years old.

The sailing academy is reasonably close to air fills and although you need day membership to launch, the slip is great and parking is included.  You can also use the changing rooms and showers.

Thank you to Pete, Tim, Geoff and David for making the trip a success.  I’m looking forward to the next one already.