Saturday 29th August – Sunday 30th August (Bank Holiday) : Another really good weekend with conditions much better than expected. Sea state was generally calm and we were able to dive the Manacles two days running as well as the Volnay and several very scenic shore dives.In all we did around 50 dives. 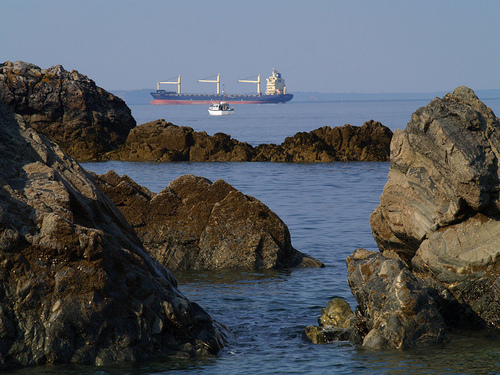 There are no incidents to relate about trailers being stuck in the sand because launch and recovery was done by enormous tractor, but one pair of divers managed to loose both delayed SMBs. The lesson here is firstly to ensure the line is neatly reeled in after previous deployment and secondly hold on to the damned thing during the dive!

Our thanks to Mary and Lawrence for organising it all and towing the Ribcraft, to Rob for preparing boats and towing the Alpha (& Laurence for the Ribcraft) and also to all the other people who helped get the the boats in and out of the boat shed(s) and prepare for launch and towing etc.

May all UK weekend dive trips in future be this good.

The Mohegan was perhaps the best for many, as the visibility was amazing!

Of all the wrecks that divers explore among the Manacles, the best known is that of the Mohegan , a 7000-ton, 482ft, liner, which hit the Vase or Penwin at her top speed of nearly 14 knots on 14 October, 1898 at 6.50pm. The impact tore off her massive steel rudder (which is still embedded in the Penwin). Then, as she careered on out of control, she hit the three peaks of the Maen Voes (The Voices), ripping out a great section of her starboard side.

On board, most of the 53 first-class passengers had just sat down to dinner when a steward shouted, “All on deck to save yourselves!”. And as the last passenger left the dining room, the sea cascaded into the engine room and rose at least 4m to drown the dynamos and put the ship’s lights out. In the darkness the liner listed to port.

Lifeboats jammed or overturned in big seas. At 7.05pm she gave a great lurch and sank down by the stern, taking her master, Captain Griffiths, with her. It was all over in 12 minutes. A few of the passengers and crew got into the rigging, which stayed above water, but despite the efforts of the lifeboat and other boats from Porthoustock, 106 people died.

Even before the funeral of the Mohegan’s victims, there had been major salvage of her cargo. Linoleum, jute, tin, furniture, lace and church ornaments were raised, together with a bell. After that, she was worked by a local hard-hat diver, who in 1904 raised the ship’s condenser, weighing over 16 tons.

You’ll find that her hull has collapsed towards the open sea, but her huge boilers poke up through all the wreckage, which stands 8m proud in places. One of the boilers is split open, and has some pretty pink growths inside. Close to this are lifeboat davits. The boilers, on the west of the wreckage, are one of the shallowest parts at 20m. Her bow is slightly shallower at 18m . The forepart lies to the south and is supported by rocks, so you can swim underneath. From the boilers to the north is the prop shaft. The north-east is the deepest part, dropping down to over 30m, where layers of steel plate lie amid the sand-floored gullies.

Today, most of the discoveries are being made on the Mohegan in what is apparently the accommodation area, some 10m south of the boilers. It was in this spot that five portholes were recently found. (One can be seen in the Three Tuns at St Keverne.) Plates bearing the crest of the original owners, the Wilson Line, wine bottles, silver teapots, and spoons and forks, have also been recovered from the area. Elsewhere a few tin ingots, left after the original salvage, have been brought up; so have a few silver dollars.

Diving the wreck is only sensible at slack. Slack on the Mohegan is 2 hours later than at Porthoustock beach. Take care when moving in the wreckage; the metal may be thin, but it is also razor-sharp.

Not far from the remains of the Mohegan are those of the Spyridion Vagliano at 50 02 48; 05 02 41W. This 1708-ton steamer, laden with grain from the Black Sea for Falmouth, hit the Voices in the dark on 8 February, 1890, ripped a hole in her 258ft-long hull, and then bounced off to the north. Her crew abandoned her at once. Her captain was drowned when his boat overturned at midnight on Godrevy Cove beach. Another boat with 13 on board was never seen again. The wreck makes a pretty dive. There is much plating and some ribs still standing in 18m, where her small single boiler is in full view. Her big spare iron prop lies flat inshore of the wreck in slightly deeper water. It is difficult to spot.