Saturday 26th March, 2016: The Good Friday evening weather forecast for SW England looked horrible – heavy rain and south westerly gales, but because it was forecast to be blowing SW it should in theory be diveable at Brixham. The facebook viz reports from Baz Drysdale (who runs Brixham Dive Shack) suggested 1-2m – not brilliant by any means.  So, chance it at Brixham or, as most sensible people wanting to dive this Easter Saturday: head for one of the local inland fresh water sites.

Nothing ventured, nothing gained: we set our sights on Brixham and our expectations to very low; if it was really bad and un-diveable we could perhaps call at Vobster on the way back. So that was the plan.

An early start to beat the Bank Holiday traffic was called for, so off from my place in Bristol at 06:30. Presumably because of the dismal forecast the roads were fairly empty, as was the car park when we arrived at Brixham Breakwater Beach around 8:30.

The sea was indeed flat (as Baz had suggested it would be) but a stiff breeze and driving rain didn’t make it look very inviting. The sea water along the tideline looked like it had been tipped out of a cement mixer! 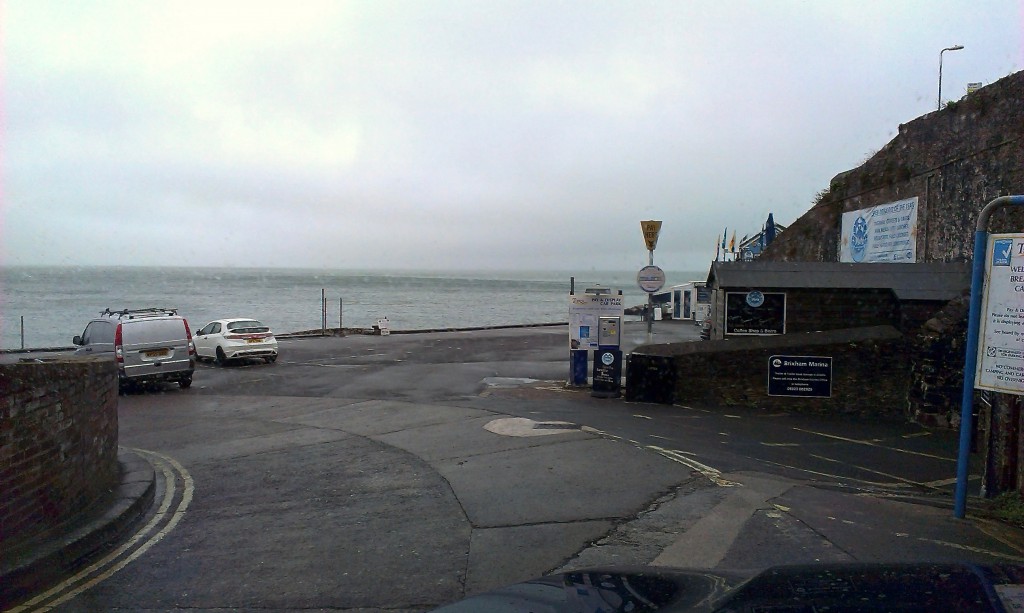 Note: For future reference, 8:30 is ½ hour too early as neither the Public toilets nor the café open until 9:00!

Wherever I chose to dive was going to be a nasty shock to my system as I had not long since returned from diving in the warm, clear tropical waters around Cebu Island in the Philippines. While we were cogitating a van drew up and a jolly chap wandered over asking what our plans were. “Are you Baz by any chance?” I asked. Yes, indeed he was.  Had he not been there to offer friendly, helpful and encouraging advice we could well have abandoned the idea to dive there and instead join the masses in Vobster on our way home.

As the viz was so poor we opted to use a buddy line: it offers a bit of freedom to look around with no chance of diver separation. Mine (pictured below) has a float in the middle which is great because it keeps the line taut and in lifting the line, reduces the risk of it snagging. 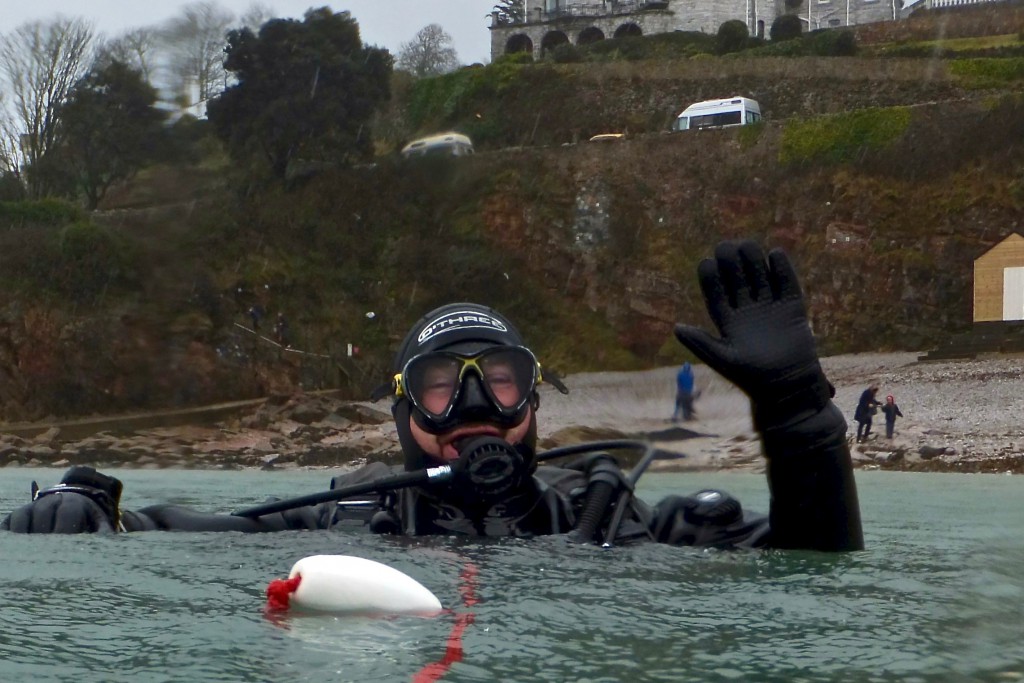 Sometimes it’s funny how things work out. Very soon into the dive my buddy Chris was wildly flashing his torch at me to get my attention. There, bold as brass between us sat a large cuttlefish. He or she didn’t seem too bothered at us being there. So often have I seen them shoot off at speed leaving just a puff of ink, or retreating to a tantalising safe distance where it is hard to observe or photograph them. So long as you don’t chase them, they sometimes cautiously edge closer out of curiosity to see what sort of strange creature you are. I’ve found waggling your fingers at them can sometimes get their interest. I didn’t need to zoom in for the photo below, it just sat there as I slowly edged closer. 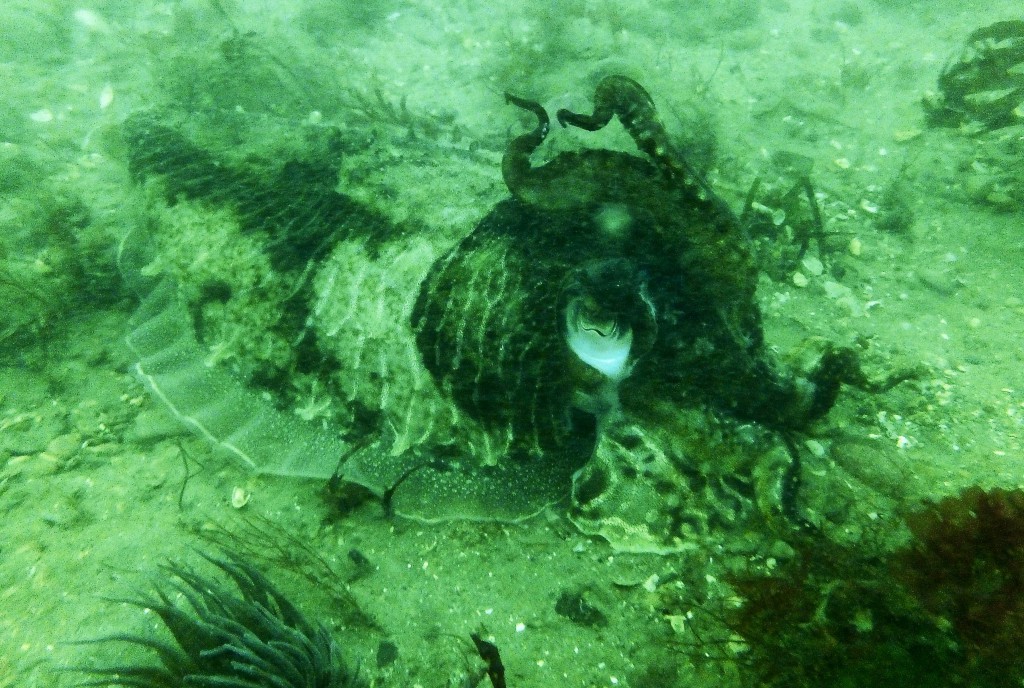 I used the underwater setting on my Fuji F550EXR housed camera. It can give a reasonable picture, but on this occasion with so much plankton and silt in the water the pictures were very green.  Not having any strobes or other lighting doesn’t help either, but I wish now I had enabled the RAW setting as capturing an image in that format offers much more scope for retrospectively apply filters to improve the image (or so I am told). Given the very low viz conditions I was however rather pleased with the video footage I took of it. You can see the waterborne particles flowing past and unfortunately something has settled on the glass on the front of my housing.

The cuttlefish was most definitely the star of the show, but there was plenty of other good stuff to be seen too. 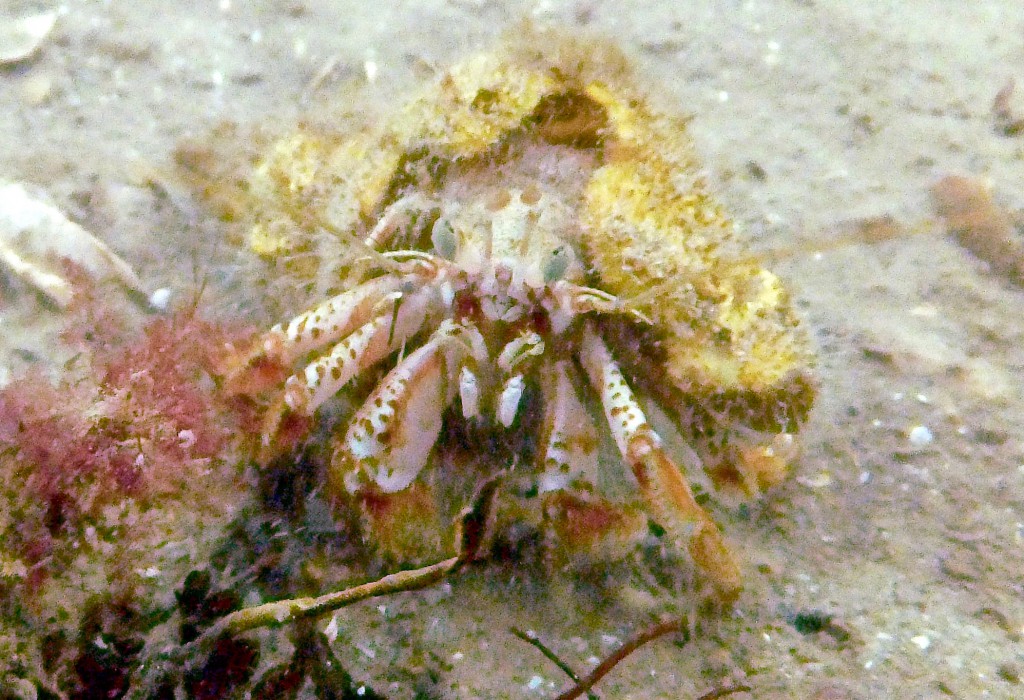 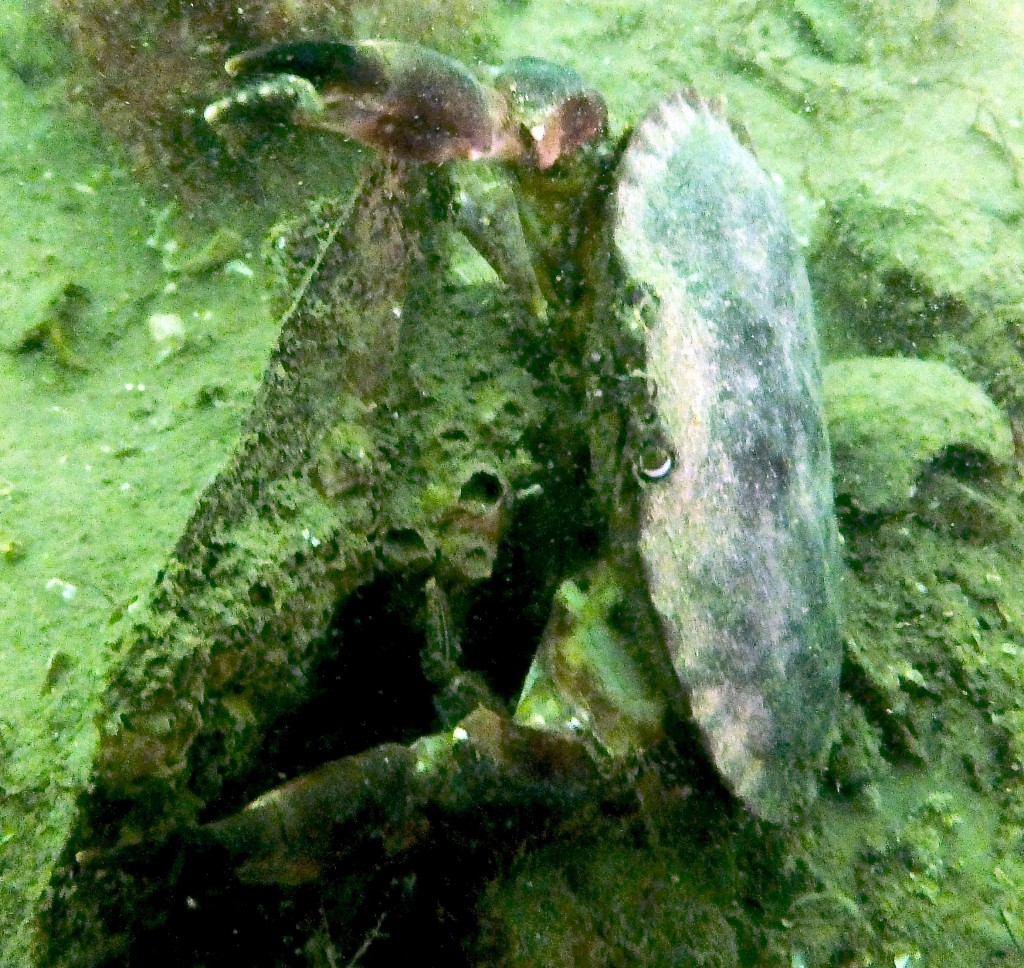 We were down for just over an hour in 9 degrees (C) water, but thanks to my nice warm and dry O’Three drysuit and base layers I was nice and warm. 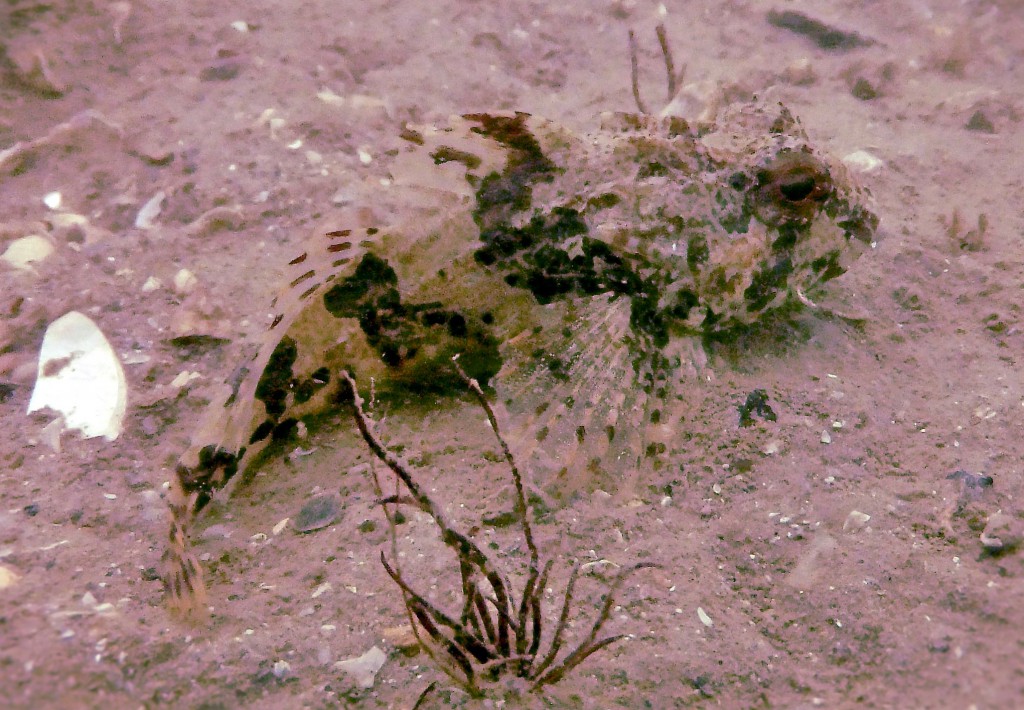 After lunch and a surface interval we went back in for a 2nd one. It too was nice in its own way. I think when the viz is poor it forces you to take a look at and concentrate on  the stuff straight ahead of you as opposed to a quick cursory glance as you are distracted by the many other things you can see.

As we surfaced from our 2nd dive there was great excitement from the beach as we were being observed by a seal. Unlike the cuttlefish it wasn’t going to hang around while I readied my camera and put it back into above water mode so no photos other than a distant blurry one. 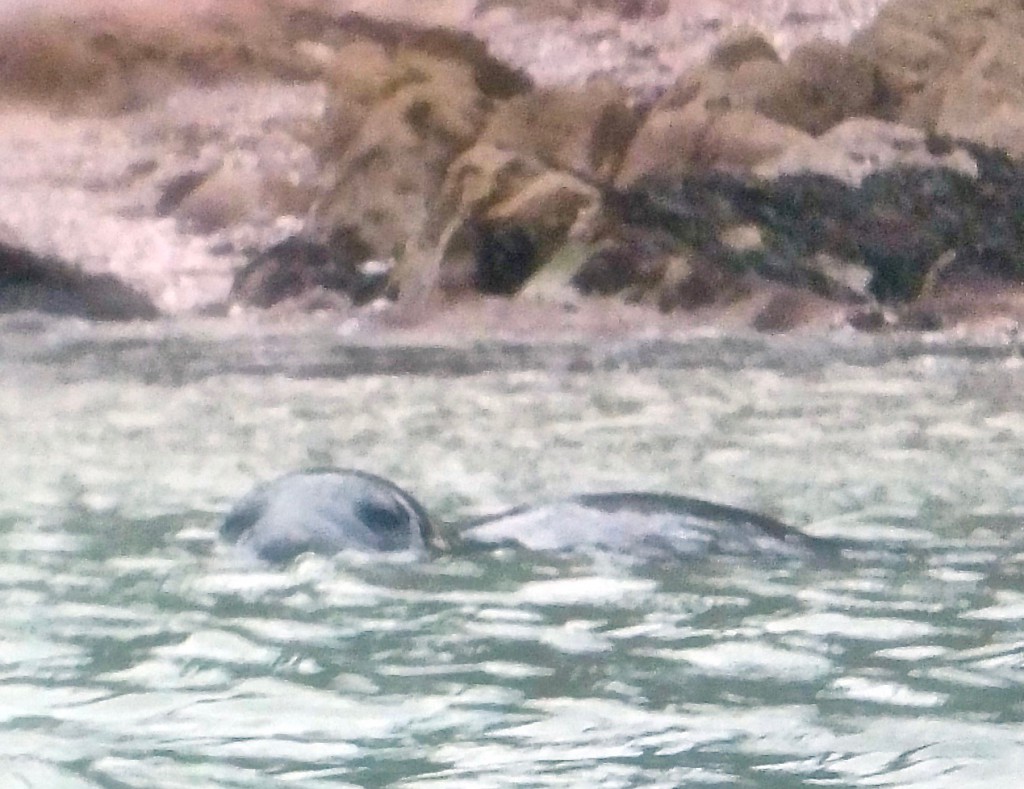 So all in all it was a very nice couple of dives, perhaps because of, rather than in spite of the conditions and it wasn’t so bad coming back to reality as I thought it was going to be after all.

A nice hot cup of coffee and debrief in the Breakwater Bistro Café and use of their free Wi-Fi rounded the day off nicely.